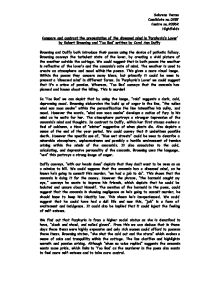 Compare and contrast the presentation of the diseased mind in 'Porphyria's Lover' by Robert Browning and 'Too Bad' written by Carol Ann Duffy Browning and Duffy both introduce their poems using the device of pathetic fallacy. Browning conveys the turbulent state of the lover, by creating a vivid picture of the weather outside the cottage. We could suggest that in both poems the weather is reflective of the lover's and the assassin's sate of mind. The weather is used to create an atmosphere and mood within the poems. This gives a more visual image. Within the poems they concern many ideas, but primarily it could be seen to present a 'diseased mind' in different forms. In 'Porphyria's Lover' we could suggest that it's a crime of passion. Whereas, 'Too Bad' conveys that the assassin has planned and knows about the killing. This is murder! In 'Too Bad' we can depict that by using the image, "rain" suggests a dark, cold, depressing mood. Browning elaborates the build up of anger in the line, "the sullen wind was soon awake" within the personification the line intensifies his sulky, sad mood. However the words, "wind was soon awake" develops a notion of fury in his mind as he waits for her. The atmosphere portrays a stronger impression of the assassin's mind and thoughts. In contrast to Duffy, within her first stanza evokes a feel of coldness, a time of "winter" suggestive of when plants die. Also depicts a sense of the end of the year period. We could convey that it underlines possible death. However the specific use of, "blue wet streets" could be seen to describe a miserable atmosphere, unpleasantness and possibly a hostile environment of tension arising within the minds of the assassin's. ...read more.

The phrase conveys the impression that all is calm, but he's proud for the first time. He has got some power, however he has altermate control concerning life and death. In contrast to 'Too Bad' we can sustain that Duffy extends the notion of a diseased mind as the assassin murders human beings for money. To have to kill, inorder to be a hard man and which obviously boosts his ego is seriously involving a diseased mind. He has no reason to. Also Duffy underlines, "Big Frank Conell hissing get a grip" coveys that the assassin is given orders, which clarifies the idea of himself to be less confident and unsure about himself, as though he has no opinion or views of his own. Within the alliteration, "that moment she was mine. Mine fair" implies a strong use of repetition. It intensifies how she perceived him as a god, which is almost angelic. However in the line, "while I debated what to do, "Browning suggests no sign of craziness, as he prevaricates over living and dieing. He spends time deliberating. From this we could sustain that he knows the difference between right and wrong. Although the line, "I found a thing to do" states clearly his diseased mind. We can suggest this because, he conveys the situation as unimportant, and he uses a casual tone. It's almost as though he's coming in and out of madness. His emotions are complicated which shows he cannot be sure about himself. In contrast to 'Too Bad', "knocking back the brandy" depicts an act of bravado. It shows that he's having a drink to calm his nerves. From this we could suggest that he almost knows that he's going to do wrong, on the other hand he does not stop the situation because he knows will earn a certain amount of money. ...read more.

It could be seen that he kills her to capture this moment and nothing will ever change. However I find this poem to be extremely disturbing. 'Porphyria's Lover' or should we call him her killer, is a demented man with severe issues to deal with. I can suppose that when he mentions, "God" I don't feel that he thinks he's better than God. He isn't even searching for a specific reason. I doubt that he even believes in God. I think this because sometimes people who are lonely and living in poor conditions always seem to have a negative opinion about God. I think that he is trying to justify what he has done. If he can convince himself that God didn't become angered by his actions, then he can come to a conclusion that what he has done is acceptable. 'Porphyria's Lover' is a strange poem about an insane individual. He does not feel sorry for what he has done and actually even feels that, the outcome is what Porphyria would have desired. We can state that the killer has an obvious sickness. The word 'Porphyria' refers to a diseased mind and we should not over look the fact that she is his disease! Her killed her because he was obsessed and lonely. He wanted control over her that he didn't have at the beginning of the poem. This is insane itself! To kill someone you love and admire greatly because you want control over them implies serious mental problems! He wanted her forever, it was the love that he thought he felt from her at that specific moment to cherish. There is no real evidence they had a solid, serious relationship. The whole poem is told from his point of view and we don't actually see what she thinks. Sabrena Verma Candidate no.0257 Centre no.20932 Highfields ...read more.