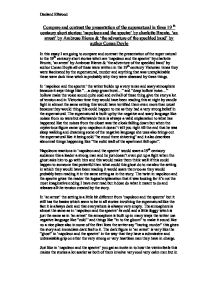 The atmosphere is almost the same as in 'napoleon and the spectre' its cold and a little foggy witch is just the same as in 'an arrest' the atmosphere is built up in many ways the writer use negative language like "cold'' and things like "in to the gloom" to make it sound like no a nice place also in some of the first lines the writer say "having murder" this gives the story and immediate dark feel to it. The dark figure in 'an arrest' is very like the "ghost" in 'napoleon and the spectre' in the way that they have a submissive and unbreakable grip on ether the very strong or very heartless men they have in charge. Just like in 'napoleon and the spectre' you gat an incite in to how the victim feels this makes the stories a lot scarier as both of them involve very cool very calm men but in this situation they are both "sweating with fear" and so if this would happen to an normal person then it would probably scare them to death it dose this by saying things like "he was sweating with fear" and this was the person who just calmly killed a guard with a metal pipe. ...read more.

All the clues that miss stoner gave to Sherlock homes leaded to the supernatural as there seemed to be no way in or out and the only thing to explain it was dieing of shock or fear so all the things like the noises and the impenetrable room lead to a strong belief that it was the super natural involved. All of the stories have something's in common like the setting is always similar it s usually a very dark very empty mysterious place also the three stories have the same atmospheric build up in all of them as it always involves noises and dark strange figures and lots of abnormal things but no all of them are the same only 'napoleon and the spectre' gives a logical explanation for everything that has happened but they all do present the supernatural in the same way by using mysterious I have Compared and contrasted the presentation of the supernatural in the three 19th centaury short stories: 'napoleon and the spectre' by charlotte Bronte, 'an arrest' by Ambrose Bierce & 'the adventure of the speckled band' by author Conan Doyle they all have the same basic structure but are all a little bit different from each other. Decland Ellwood ...read more.