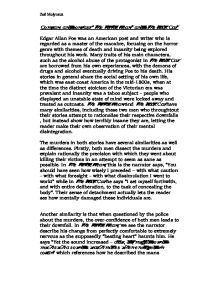 Compare and contrast The Tell-Tale Heart and The Black Cat

Compare and contrast "The Tell-Tale Heart" and "The Black Cat" Edgar Allan Poe was an American poet and writer who is regarded as a master of the macabre, focusing on the horror genre with themes of death and insanity being explored throughout his work. Many traits of his main characters, such as the alcohol abuse of the protagonist in The Black Cat are borrowed from his own experiences, with the demons of drugs and alcohol eventually driving Poe to his death. His stories in general share the social setting of his own life, which was east-coast America in the mid-1800s, when at the time the distinct stoicism of the Victorian era was prevalent and insanity was a taboo subject - people who displayed an unstable state of mind were locked away and treated as outcasts. The Tell-Tale Heart and The Black Cat have many similarities, including these two men who throughtout their stories attempt to rationalise their respective downfalls , but instead show how terribly insane they are, letting the reader make their own observation of their mental disintegration. ...read more.

Right up until the revealing of the body, this man displays a stable state of mind to all around him. Neither man displays any remorse for the killings. The difference between the two murders is that in The Tell-Tale Heart, the murder does not come as a surprise. We are prepared from the start for what is going to happen, as he says "I made up my mind to take the life of the old man, and thus rid myself of the eye forever". Poe's mastery is seen here as he builds up tension; the pace of the story is extremely slow - he terrorises the old man for seven nights before the murder. A reader's enjoyment of the story rests on the descriptions of how this man's mind progresses, because he is extremely worrying as well as engaging. On the contrary, the murder in The Black Cat comes as a complete surprise. Just as his wife is simply accompanying him to the cellar, he is driven into a fit of rage and aims a blow at the cat. ...read more.

There are basic similarities between both narrators displayed in these stories. We sense that both men deeply loved their victims, and I think Poe makes this clear to make the crimes they have committed seem more irrational. They murdered because of their mental damage and while are not remorseful for the killings, they may have regretted that their victims had to die because of their obsessions. In The Tell-Tale Heart the corpse is dismembered, and while this is not done in The Black Cat, we can compare the methodical way in which the men go about the murders. Also, in both of the stories, the narrators reflect on their deterioration after it has happened. This allows them to comment on what happened with hindsight, and therefore we have a unique viewpoint of what happened. The two stories are both told in first person, which is necessary to gain a better idea of both men's characters. The language Poe uses in both stories is extremely successful in creating the two characters and setting the scenes for the murders. Zo� Molyneux ...read more.