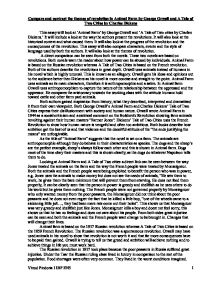 Compare and contrast the themes of revolution in Animal Farm by George Orwell and A Tale of Two Cities by Charles Dickens This essay will look at 'Animal Farm' by George Orwell and 'A Tale of Two cities by Charles Dickens.' It will include a look at the way the authors present the revolutions. It will also look at the historical context and what caused them. It will also look at the progress of the revolution and the consequences of the revolution. This essay will also compare characters, events and the style of language used by both the authors. It will also look at the themes of revolution. A direct comparison can be seen from both the novels. These two novels are based on revolutions. Both novels warn the reader about how power can be abused by individuals. Animal Farm is based on the Russian revolution whereas A Tale of Two Cities is based on the French revolution. Both of the authors describe the revolutions in great depth. Orwell uses animals instead of humans in his novel which is highly unusual. This is known as an allegory. Orwell gets his ideas and opinions out to the audience better then Dickens as his novel is more concise and straight to the point. Animal Farm uses animals as its main characters, therefore it is anthropomorphic and a satire. In Animal farm Orwell uses anthropomorphism to capture the nature of the relationship between the oppressed and the oppressor. He compares the aristocracy towards the working class with the attitude humans hold toward cattle and other farm yard animals. Both authors gained inspiration from history, what they described, interpreted and dramatized it from their own viewpoint. Both George Orwell's Animal Farm and Charles Dickens' Tale of Two Cities express their disillusionment with society and human nature. Orwell wrote Animal Farm in 1944 as a social criticism and a satirical comment on the Bolshevik Revolution showing farm animals revolting against their human masters "Farmer Jones". ...read more.

They both think that they are superior. Napoleon was very greedy and selfish. Napoleon would represent Stalin during the Russian revolution. Napoleon blamed Snowball for working with Jones since the beginning. Napoleon steals Snowballs plan of the windmill. Snowball worked day and night to get the "plans of the windmill" ready. Napoleon sees Snowball as a threat and exiles him from Animal Farm. The shrewd Napoleon then declared that the plan and idea of the windmill were his from the start and that Snowball did no work but was actually planning a rebellion with Jones. The extermination of Snowball represents the exile of Trotsky from Russia. Napoleon breaks the commandments and gets Squealer to brainwash the animals to believe that they have not broken the commandments. Napoleon was the name of a revolutionary who ended up gaining power and tyrannising. He more than anyone else is responsible for the betrayal of Majors dream. Napoleon is a coward dictator because he was not fighting in the Battle of the Cowshed. Napoleon deals with a human and this shows us that he only cares about himself and not the welfare of the farm. He even kills Boxer who works hard all day and did most of the work when building the windmill/ twice. Napoleon does no work. He just sits all day and watches the other animal work. As Napoleon got full power animals found it hard to get decent meals and famine worsened. The animals were short of food. It was worse then Jones time. Another battle took place where the animals won but as an outcome the nearly finished windmill fell apart. Napoleon blamed Snowball for this and declared that the thickness of the wall of the windmill will increase. It can be clearly seen that Napoleon was a greedy, selfish and a bad dictator. Whoever argued or went against Napoleon was killed in brutally in front of the other animals in an attempt to scare the other animals. ...read more.

Both novels plot is similar and the issues discussed are similar. The characters are very similar but the plot is different. Animal farm is written in chronological order with the Russian revolution whereas A Tale of Two Cities is not written in this way. Both authors make use of the third person and their language is effective and persuasive. Dickens describes the revolution in great depth and his emotional words. He describes the revolution using words like "blood, death, dark" which make the reader think about the revolution. Dickens is not concise and his novel has over-wordiness whereas Orwell is concise and straight to the point. He talks about all the issues and writes everything about the revolution and it is far shorter than Dickens novel but the quality of Orwell novel is far better than Dickens. He addresses all the key issues using the minimum of words. This is a major reason Orwell's novel being more effective than Dickens. Dickens doesn't explain the revolution like Orwell does. Dickens includes other social events like Lucies marriage, Darnay's party as he was not found guilty of treason. These events are not in anyway linked to the revolution and this is one major reason for Dickens novel not being so effective even though it catches the readers attention straight with his opening line "it was the best of times, it was the worst of times" this puts the reader in suspense and makes him read on. Overall's Animal Farm is much more effective for showing the effects and themes of revolution as it clearly shows the causes and consequences of the revolution; it explains the corruption and abuse of power. The novel is short and concise and because of this younger people can read this. It does not use difficult words and the language is very simple. It's very persuasive. It makes you think and visualize the event in you mind. It shows you a message a message you understand a message that teaches you something a message that will help you one day. 1 Vinod Pindoria 11BP EN5 ...read more.