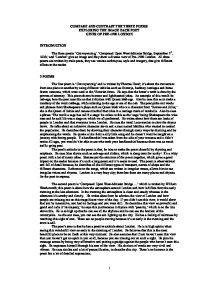 Compare and contrast the three poems exploring the image each poet gives to pre-1900 London.

COMPARE AND CONTRAST THE THREE POEMS EXPLORING THE IMAGE EACH POET GIVES OF PRE-1900 LONDON INTRODUCTION The three poems 'Conveyancing,' 'Composed Upon West-Minister Bridge, September 3rd, 1820,' and 'London' give an image and they show a diverse view of Pre-1900 London. All three poems are written by male poets, they use various techniques, style and imagery, that give different effects to the reader. 3 POEMS The first poem is 'Conveyancing' and is written by Thomas Hood; it's about the movement from one place to another by using different vehicles such as Gurneys, hackney carriages and horse drawn caravans, which were used in the Victorian times. He says that the horse's work is done by the powers of attorney. This poem shows humour and lighthearted jokes. An example of this would be cab-age; here the poet uses this so that it rhymes with Queen Mab age. Also he uses this as to make a mockery of the word cabbage, while referring to the age or era of the cab. The poet picks out words and phrases from Shakespeare's plays such as Queen Mab who is a character from 'Romeo and Juliet,' she is the Queen of fairies and causes mischief that rides in a carriage made of nutshells. Also he uses a phrase 'The world a sage has call'd a stage' he refers to this as the 'sage' being Shakespeare the wise man and he said life was a stage on which we all performed. ...read more.

Rhymes are used to make the poem more appealing in order to maintain the rhythm. The formation of this poem is in the form of a sonnet. London is a very beautiful place and nothing on Earth is more beautiful than this morning. The final poem is called 'London' and is written by William Blake; this poem is about fears, and gives a darker view of London at that time. It talks about how people are affected by the plague of poverty and how little children are sent up chimneys to clean them. Also, how the people are mentally and physically trapped because there's so much grime and dirt. He writes about the harsh conditions that drag everyone down and how the prostitutes would regularly give birth. All the people are miserable and they are trapped in an environment of gloom. How in every voice you hear the cry of fear. He writes about the psychological handcuffs that restrict you. Now that soldiers have returned they risk death everyday. When you get married it is the happiest day of your life and the atmosphere around you is blissful, whereas in this poem the poet describes the poem as being a funeral carriage. Even though there is a wedding it feels like a funeral and people are still in fear. The poverty has increased immensely. The people's expressions are described as sad, mournful and sombre. ...read more.