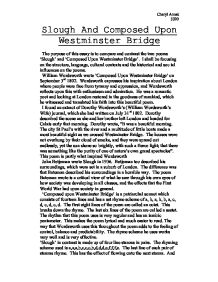 Compare and contrast the two poems 'Slough' and 'Composed Upon Westminster Bridge'.

Slough And Composed Upon Westminster Bridge The purpose of this essay is to compare and contrast the two poems 'Slough' and 'Composed Upon Westminster Bridge'. I shall be focusing on the structure, language, cultural contexts and the historical and social influences on the poems. William Wordsworth wrote 'Composed Upon Westminster Bridge' on September 3rd 1802. Wordsworth expresses his inspiration about London where people were free from tyranny and oppression, and Wordsworth reflects upon this with enthusiasm and admiration. He was a romantic poet and looking at London restored in the goodness of mankind, which he witnessed and translated his faith into this beautiful poem. I found an extract of Dorothy Wordsworth's (William Wordsworth's Wife) journal, which she had written on July 31st 1802. Dorothy described the scene as she and her brother left London and headed for Calais early that morning. Dorothy wrote, "It was a beautiful morning. The city St Paul's with the river and a multitude of little boats made a most beautiful sight as we crossed Westminster Bridge. ...read more.

But the last line ends on "death". The structure that I prefer is the structure used for 'Slough'. I prefer this because it stays on one level until the very last beat of every line, which then is changed quickly. I particularly liked the way the first word of each stanza is emphasised. It is a negative word like "h**l" and "tears". The language that William Wordsworth uses consists of clever imagery. An example of this is used in his first line: 'Earth has not anything to show more fair:' this line shows that there was nothing that could of compared to London. On Earth it was more beautiful than anything else. This is an example of my hyperbole. Another example that he uses is: Never did the sun more beautifully steep'. By this Wordsworth means that at no other time had he seen the sunset rise as beautiful as it was. He also uses assonance. He uses this on his second and third line where he writes; Dull would be of soul who could pass by. ...read more.

This is bitter because he thinks that Slough should be destroyed. The verse 'And get that man with double chin, who'll always cheat and always win, who washes his repulsive skin, in women's tears' is very aggressive as it is about men who over indulge in the comforts of their wealth and abuse their wealthy status to manipulate the members of the under privileged in the society who look to him for comfort. Betjeman uses his words effectively to express his hatred for Slough. He says the ordinary workers; 'the bald young clerks' have 'tasted h**l'. The ideas of artificial lives is cont6inued in his description of the peoples lives. They drink in 'Bogus' Tudor bars; they have 'peroxide hair' and they 'paint their nails'. I preferred 'Composed Upon Westminster Bridge' rather than 'Slough' as I found that the poem was very calming and tranquil. It was short, easy to read and easy to understand. The ways that Wordsworth described the place made the poem shine because it was made to sound really peaceful and beautiful. I was able to create a vision of a place that seemed non-existent, or far out of our reach, but Wordsworth really captures the beauty. Cheryl Arnak 3320 ...read more.