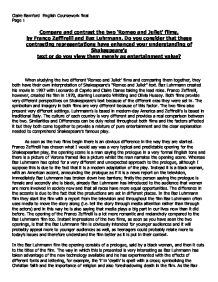 Compare and contrast the two 'Romeo and Juliet' films,by Franco Zeffirelli and Baz Luhrmann. Do you consider that these contrasting representations have enhanced your understanding of Shakespeare's text?

Compare and contrast the two 'Romeo and Juliet' films, by Franco Zeffirelli and Baz Luhrmann. Do you consider that these contrasting representations have enhanced your understanding of Shakespeare's text or do you view them merely as entertainment value? When studying the two different 'Romeo and Juliet' films and comparing them together, they both have their own interpretation of Shakespeare's "Romeo and Juliet" text. Baz Luhrmann created his movie in 1997 with Leonardo di Caprio and Claire Danes taking the lead roles. Franco Zeffirelli, however, created his film in 1970, starring Leonardo Whitting and Olivia Hussey. Both films provide very different perspectives on Shakespeare's text because of the different eras they were set in. The symbolism and imagery in both films are very different because of this factor. The two films also present very different settings. Luhrmann's is based in modern-day America and Zeffirelli's is based in traditional Italy. The culture of each country is very different and provides a real comparison between the two. Similarities and Differences can be duly noted throughout both films and the factors affected it but they both come together to provide a mixture of pure entertainment and the clear explanation needed to comprehend Shakespeare's famous play. As soon as the two films begin there is an obvious difference in the way they are started. Franco Zeffirelli has chosen what I would say was a very typical and predictable opening for the Shakespearian play, the opening scene is a man saying the prologue in a very formal English tone and there is a picture of Verona framed like a picture whilst the man narrates the opening scene. Whereas Baz Luhrmann has opted for a very different and unexpected approach to the prologue, although I suppose this is due to the fact that it is a modern adaptation of the play. Instead it is a black woman, with an American accent, announcing the prologue as if it is a news report on the television, immediately Baz Luhrmann has broken down ...read more.

Finally after a long awaited moment we see Juliet, in the Franco Zeffirelli. Immediately we see the childish side of her character. Her features are very striking; dark brown hair and olive skin. She is wearing red when we first meet her and in several other scenes she is also wearing red. I think this is a very important aspect of her as red usually symbolises passion and love but also blood and death, which foreshadows her future. She comes across as very exuberant and happy (she is laughing). Whereas in the Baz Luhrmann production there is more of an emphasis on the theme of speed and time. The camera is zooming around from one character to another and everything seems very frantic and rushed until it comes to Juliet whose head is underwater which blocks out all the outside sounds and everything sounds blurred as is the vision. Water imagery is used a lot in this interpretation of Romeo and Juliet. Her hair is wet which makes her seem very vulnerable and she looks very innocent but naturally beautiful. This is quite different to the Franco Zeffirelli where she is dressed quite glamorously and here she is just in jeans and a t-shirt (like a normal teenager). When we see the Nurse, in the Baz Luhrmann, it is quite significant that the choice of the Nurse is a typical poor, foreign, immigrant which puts emphasis on her low status. In the Franco Zeffirelli production there is more emphasis on the Nurse than there is on Lady Capulet whereas in the Baz Luhrmann production it is the opposite. There is a lot less emphasis on the Nurse's relationship with Juliet which I think is a vital part of the play (Baz Luhrmann), however they have focused on Lady Capulet's distant relationship with Juliet to make it clear that they don't have a very strong mother and daughter bond. ...read more.

It has been made a lot more romantic and emotional. After they die there are a series of flashbacks of their time together during their short lived relationship accompanied by heavenly music. The ending of the Franco Zeffirelli shows the play ending on a positive note and the families reunite whereas in the modern interpretation the ending is harsh and negative. The films end like they started; the Franco Zeffirelli framed and the Baz Luhrman with the news reporter rounding it off. These contrasting representations have enhanced my understanding of Shakespeare's text. However I found the modern day interpretation a lot more engaging and easy to understand as it had been adapted to modern day circumstances which made it easier for me to understand and relate to. The Franco Zeffirelli is what I expected the 'Romeo and Juliet' play to be like. It didn't really do much to help enhance my understanding of the text apart from a few key scenes, for example, the balcony scene. I think that the Baz Luhrmann production was much more intended for entertainment due to the way it was set out and how he had cut out bits of the scenes and made it into more of an action and love story rather than just basing it on romance. However I think making the play more entertaining played a part in enhancing my understanding of the text, as because I got interested in the film I was more determined to understand the film. The Franco Zeffirelli interpretation of 'Romeo and Juliet' sticks to the text more and most parts of the play are still in the film. As a personal opinion the Franco Zeffirelli production is more appropriate for educational uses as it gives a fair representation of both houses and it is more based on the Shakespeare text, but I personally find the Baz Luhrmann production more engaging and easier to understand. However if I were to write an essay using one of the films about the play the Franco Zeffirelli would be more accurate. Claire Bamford English Coursework final Page 1 ...read more.