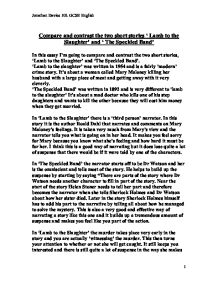 She tells them there might be something like that in the garage "She didn't think they had a big spanner. But there might be some things like that in the garage." This is all a big 'red herring' and leads the police away from what did kill him. To make matters worse for the police Mary asks them to eat the supper she had make for Mr Maloney "Why don't you eat up that lamb that's in the oven" this is a very good way of getting rid of her murder weapon. In 'The Speckled Band' the murder had happened two years previously and now there were trying to prevent another murder and solve the existing one. This is a true 'murder mystery' because you don't know who committed the crime until right at the end whereas in 'lamb to the slaughter' you know from the start. The whole story is building up suspense until you finally find out who killed the girl. This is the main focus rather than in 'Lamb to the Slaughter' the main focus is how Mary's going to get away with the murder and not get caught. In 'Speckled Band' there is a strong motive for Dr Roylott to kill his two stepdaughters because he has become quite poor and when the girls are going to get married he has to give them a substantial amount of his money. ...read more.

In 'Lamb to the Slaughter' the detectives seem to be unprofessional by drinking the whisky and not suspecting Mary Maloney because they knew who she was, when every thing was pointing at her they appear to be almost 'bumbling idiots' and cant see what's right under their noses " Probably right under our very noses. What you think, Jack?" In 'speckled band' the police couldn't crack the case so Miss Stoner had to call upon Holmes. In 'Lamb to the Slaughter' the police are so stupid as to eat the murder weapon and are totally fooled by Mrs. Maloney. There are many more differences than similarities between the two stories. I think this is because the writers are two very different people and they have different backgrounds, Roald Dahl mostly wrote for children and that perhaps it is very light hearted the way that he has 'pops' at the detectives, but Sir Arthur Conan Doyle was a doctor and knew all the medical views of the cases which makes his books more real and perhaps he had a more of a respect towards the police than Roald Dahl did. The stories are different because of the time they were written, Roald Dahl wrote about a women killing her husband and that may have been less common in 1892 and that Is why Conan Doyle wrote about the women being a victim and her stepfather killing the girls. ?? ?? ?? ?? Jonathan Davies 10L GCSE English 1 ...read more.