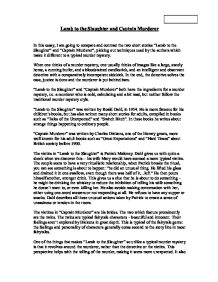 Lamb to the Slaughter and Captain Murderer In this essay, I am going to compare and contrast the two short stories "Lamb to the Slaughter" and "Captain Murderer", picking out techniques used by the authors which make it different to a typical murder mystery. When one thinks of a murder mystery, one usually thinks of images like a large, stately home, a cunning butler, and a bloodstained candlestick, and an intelligent and observant detective with a comparatively incompetent sidekick. In the end, the detective solves the case, justice is done and the murderer is put behind bars. "Lamb to the Slaughter" and "Captain Murderer" both have the ingredients for a murder mystery, i.e. a murderer who is cold, calculating and a bit mad, but neither follow the traditional murder mystery style. "Lamb to the Slaughter" was written by Roald Dahl, in 1954. He is more famous for his children's books, but has also written many short stories for adults, compiled in books such as "Tales of the Unexpected" and "Switch b***h". In these books he writes about strange things happening to ordinary people. "Captain Murderer" was written by Charles Dickens, one of the literary greats, more well known for his adult books such as "Great Expectations" and "Hard Times" about British society before 1900. ...read more.

The strange thing about Mary is that instead of reacting to the terrible crime she has committed , she merely says "alright, so I've killed him". the change in her character happens immediately at this point. "it was extraordinary now, how clear her mind became all of a sudden, she began thinking very fast". She doesn't even mind that the death penalty is acceptable. This is not the general frame of mind of a loving housewife who just killed her husband. She is either completely in control of the situation, thinking ahead to how she is going to cover it up, or in shock and denial. I think it is a bit of both. The detectives run a rather disorderly case, and don't find out who the murderer is. They are pretty sloppy - Mary manipulates them into having some whiskey, which limits their powers of deduction so that when they are eating the murder weapon, they don't realise it. They don't base any of their time at the house thinking about the other aspects of a murder case, such as the motive or how the murderer got into the house, they spend all of their time looking for the murder weapon. They also don't pick up on Mary's odd, manipulative behaviour. ...read more.

They all marry him for his wealth and are expected to know how to make pies. "and if she couldn't, by nature or education, she was taught." To conclude, there are many similarities in the two stories. They are both untypical murder mysteries: in each, the wife kills the husband because of his cruel intentions; food plays a very dark and sinister role; both have what might be interpreted as a subtle, feminist subtext; there is a ritualistic element; both murderers get away with it; and both are written by authors writing differently to their normal style, and, particularly, context. There are also many differences between the two: one is a mock fairytale, told as though a child was reciting it. The other involves policemen trying to solve the case, which makes it more realistic. One features just one murder whereas the other has several. The heroine sacrifices herself in "Captain Murderer", whereas Mary is a more conniving character, and manages to evade capture. The murder she carries out happens on the spur of the moment, and may have been caused by a temporary loss of mental stability. In "Captain Murderer", the killing is done through a disturbing ritual, by a complete madman who undergoes no change in character. Descriptions of atmosphere, characters, and feeling are much more prominent in "Lamb to the Slaughter", whereas the main focus of "Captain Murderer" is on the story line and description of the ritual. ...read more.