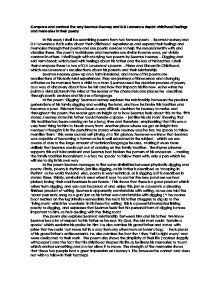 Compare and contrast the way Seamus Heaney and D.H Lawrence depict childhood feelings and memories in their poetry

Compare and contrast the way Seamus Heaney and D.H Lawrence depict childhood feelings and memories in their poetry In this essay I shall be examining poems from two famous poets - Seamus Heaney and D.H Lawrence. Both write about their childhood experiences and express their feelings and memories through their poetry and use poetic devices to help the reader identify with and visualise these. The poet's techniques and memories are similar in some ways, yet vividly contrast in others. I shall begin with studying two poems by Seamus Heaney - Digging and Mid term break, which deal with feelings about his father and the loss of his brother. I shall then compare these to two of D.H Lawrence's poems - Piano and Discord in Childhood, which are Lawrence's recollections about his parents and their relationship. Seamus Heaney grew up on a farm in Ireland, and many of his poems are recollections of his early rural experiences. They are journeys of innocence and changing attitudes as he matured from a child to a man. Seamus used the creation process of poetry as a way of discovery about how he felt and how that impacts his life now. As he writes he paints a vivid picture in the mind of the reader of the characters and places he describes through poetic devices and his use of language. In the poem 'Digging' Seamus Heaney explores the relationship between the previous generations of his family digging and working the land, and how he broke this tradition and became a poet. This must have been a very difficult decision for Heaney to make and throughout the poem; the reader gets an insight as to how Seamus feels about this. In the fifth stanza, Heaney states his father 'could handle a spade - just like his old man' showing that this tradition has been carrying on for a long time and therefore emphasising that this was a very hard thing for him to break away from. ...read more.

This is why it must have been so hard for him to desert the family tradition as he did in 'Digging.' The father featuring in 'Mid term break' is very different to the strong and stoical anchor of the family as he is in 'Digging.' The sight of his unemotional father 'crying' was alarming to Seamus as he had 'always taken funerals in his stride.' The way his mother reacted was also very revealing. Instead of crying, she 'coughed out angry tearless sighs,' giving the sense she had cried all her tears, and was trying to put on a brave face. She must have been experiencing a mixture of emotions as her son's death was unnatural. Seamus' mother held his hand to attempt to keep what she has left close to her, but also showing that they are a very close knit family. Holding Seamus' hand could also have been an attempt to comfort him too; showing that his mother was brave. Mid-Term Break deals with the theme of loss, and we can tell that Seamus was deeply impacted by the death of his brother. He found hard to come to terms with, but it made it easier that all his family were united in their loss, and helped each other through it. This shows what a close family Seamus came from. D.H Lawrence was born in Nottinghamshire. He was the fourth child of struggling coal miner and heavy drinker and his mother, a school teacher. His childhood was dominated by poverty and friction between his parents. D.H Lawrence said 'I was born hating my father' but developed a deep emotional bond with his mother, who he helped die by overdosing her on sleeping medicine when he was twenty two. He began to write poetry in 1909, mainly about his childhood and how he felt about his parents and experiences. The in the poem 'Discord in Childhood,' explores the violence between his parents which is exemplified in a fight, and his feelings about their turbulent relationship. ...read more.

D.H Lawrence says that his 'manhood is cast' meaning that he is a product of his experiences and he cannot change that. Seamus Heaney too believes that he too is a creation of his experiences, but instead views this as a good thing because it gives him 'living roots' in his head which he can turn into poetry. The circular structure of this poem is similar to that in 'Discord in childhood' where the ongoing storm conveys the ongoing violence between his parents. The fact that the poem is not concluded but returns to the beginning shows that D.H Lawrence has not concluded these feelings - he has not yet learnt how to deal with them. D.H Lawrence and Seamus Heaney are both poets who use poetry to express their feelings about their childhood. Both write in different styles and express different emotions. Whilst Seamus Heaney enjoyed a quiet and secure childhood, growing up on a farm, D.H Lawrence experienced great 'discord' in his childhood, however these bad memories are sometimes overridden by the loving moments he shared with his mother. Seamus Heaney had great respect for his father who 'always took things in his stride' and was devastated that he could not carry on the family tradition. On the other hand, D.H Lawrence greatly disliked his father and the way his father treated his mother. Few of the memories of his father are positive, and he is described as a 'booming and bruising' character. However there are some similarities between the poets. Both feel a great sense of love towards one (or in Heaney's case both) of their parents, and have fond recollections of times spent with them. Even so, their poems are not overly sentimental, yet appeal to the reader's emotions in other ways. Heaney and Lawrence believe they are products of their own experiences and use symbolism and other poetic techniques to strengthen these experiences when they are transferred onto paper in the form of poetry. ...read more.