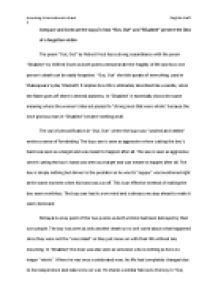 Compare and Contrast the ways in how Out, Out and Disabled present the idea of a forgotten victim

a very important role in the poem because one of the interesting part of ?Disabled? is the main character as we can easily see how rueful he is due to his nostalgic days of when he was young. At stanza 1, it is hard to convince that the ruined man is the same person in stanza 3. He was known as one of the admired people as he was ?silly? for his face. As he looked like a ?god in kilts? it is very contrasting to his future where he is in his ?ghastly? suit. However, even though they have a contrasting structure they have something similar in terms of events that are not mentioned. Both poems predict something dreadful is about to happen to the characters as the personification used in ?Out, Out? ?snarled and rattled? hints that that the buzz saw is planning to strike. The structure has an unusual change where it is first introduced to something unpleasant which is the buzz saw but then the tone quickly changes to a tranquil state. Then it quickly shows the mountain ranges ?one behind the other? and ?under the sunset, far into Vermont? it foreshadows the boy?s death as the beauty could symbolize heaven. ...read more.

In ?Disabled? the idea of a forgotten victim is not shown as him resulting in death. It is the opposite of the boy as he is longing for his death. A powerful word Wilfred Owen used was that sleep had ?mothered? which is a personification that shows his love of sleep where he is nurtured and safe, it even implies that the man is depressed. It assumes that the disabled man wants to escape from reality and go to his own reality in his sleep. Overall, the fragility and delicateness of life and youth mainly presents the idea of the forgotten victim. A forgotten victim is usually immobilized and helpless when they have lost everything. ?Out, Out? and ?Disabled? poignantly present forgotten victims. Even when doing a noble action like joining the army, a man can still be rejected among people. ?Out, out? and ?Disabled? were both written during difficult times and acquaints the reader to the atmosphere of the early 19?s. ?Disabled? and ?Out, Out? was written during the World War 1 where it was difficult and dark times yet in ?Out, Out? we get a taste of how cold society was back then. Society can be cruel and filled with individualism where everyone is their own man so it plays a key point of making the two victims forgotten. ...read more.