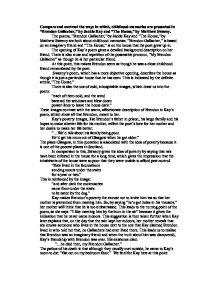 Compare and contrast the ways in which, childhood memories are presented in &quot;Brendon Gallacher,&quot; by Jackie Kay and &quot;The House,&quot; by Matthew Sweeny.

Compare and contrast the ways in which, childhood memories are presented in "Brendon Gallacher," by Jackie Kay and "The House," by Matthew Sweeny. The poems, "Brendon Gallacher," by Jackie Kay and "The House," by Matthew Sweeny are both about childhood memories. "Brendon Gallacher," is based on an imaginary friend and "The House," is on the house that the poet grew up in. The opening of Kay's poem gives a detailed background description on her friend. There is also a use and repetition of the possessive pronoun, "My Brendon Gallacher" as though he is her particular friend. At this point, this makes Brendon seem as though he was a close childhood friend remembered by the poet. Sweeny's poem, which has a more objective opening, describes the house as though it is just a particular house that he has seen. This is indicated by the definite article, "The House." There is also the use of cold, inhospitable images, which draw us into the poem: "each of them cold, and the wind battered the windows and blew down power-lines to leave the house dark." These images contrast with the warm, affectionate description of Brendon in Kay's poem, which show all that Brendon, meant to her. ...read more.

His existence died: "...he died then, my Brendon Gallacher." The pathos of his death is that although they usually met outside, he came to Kay's room to die: "flat out on my bedroom floor." We feel for Kay here at this point because it seems that she was lonely and that is why she imagined Brendon so, now that he is gone, she is alone again. The fact that Brendon dies on her bedroom floor, gives the impression that this is where Kay retreated to, to mourn the loss of her imaginary friend. This compares with the way in which Sweeny reveals, at the end of his poem that the house he was describing, was actually the house he grew up in which implies that he had an impoverished childhood: "And I did grow up there." This is because like Brendon the truth about the house is hidden till the end. Both poems suggest a lonely childhood. Kay's loneliness is proved by the fact that she felt the need to imagine a friend. Her loneliness is also shown by the fact that she imagined Brendon with a large family: "He had six brothers and I had one, my Brendon Gallacher." ...read more.

This image is reinforced by the image of the crows, waiting to nest in the chimneys: "Crows were always sitting on the wires, planning nests in the chimneys," which suggest that fires were rarely lit, probably because of the cost of coal, which explains why the bedrooms were always cold. The poem ends on a note of possession, as though he did have some affection for the house as he excuses its faults with: "but it did have a piano upstairs. And I did grow up there." This suggests that he experience some happiness there. Similarly, the possessive pronoun is stressed in a note of regret and mourning at the end of Kay's poem: "O Brendon, Oh my Brendon Gallacher." That last line makes Kay's mother's stark revelation about Brendon never living at "24 Novar" all the more crass and insensitive as though she did not realise that she had killed her daughter's best friend. The poems, "Brendon Gallacher," by Jackie Kay and "The House," by Matthew Sweeny present childhood memories through Kay's detailed imagery of Brendon and Sweeny's cold and inhospitable images, which show the feelings of the poets clearly. Through this, we are able to reveal their loneliness and their sense of affection and loss. ...read more.