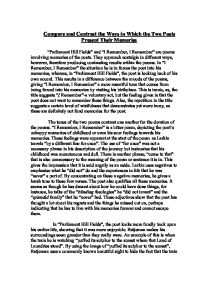 Compare and Contrast the Ways in Which the Two Poets Present Their Memories "Parliament Hill Fields" and "I Remember, I Remember" are poems involving memories of the poets. They approach nostalgia in different ways, however, therefore producing contrasting results within the poems. In "I Remember, I Remember" the situation he is in forces the poet into his memories, whereas, in "Parliament Hill Fields", the poet is looking back of his own accord. This results in a difference between the moods of the poems, giving "I Remember, I Remember" a more resentful tone that comes from being forced into his memories by visiting his birthplace. This is ironic, as, the title suggests "I Remember"-a voluntary act, but the feeling given is that the poet does not want to remember these things. Also, the repetition in the title suggests a certain level of wistfulness that demonstrates yet more irony, as these are definitely not fond memories for the poet. The tones of the two poems contrast one another for the duration of the poems. "I Remember, I Remember" is a bitter poem, depicting the poet's unhappy memories of childhood or even his sour feelings towards his memories. These feelings were apparent at the start of the poem as Larkin travels "by a different line for once". ...read more.

Another way in which Betjeman tries to make the images seem grander is in his poetic diction. He alters the syntax on numerous occasions like "in Virginia creeper drown" and "train and tram alternate go". This gives an archaic sound to the poem, which leads to grandness as it seems rich and has a more poetic feel than if the proper word order was used. The issue of pity appears in both poems. With Betjeman, he pities the lives of others, but Larkin demonstrates self-pity in his poem. The pity in "Parliament Hill Fields" is shown in the lines "And my childish wave of pity, seeing children carrying down Sheaves of drooping dandelions to the courts of Kentish Town". There is ambiguity in the real meaning of these lines. It is possible that he pities himself here, although, by following the statement about pity with references to the children, it isn't that likely. It could be that it is a simple case of him pitying the children for how hard their lives are, or for how meagre their existence in comparison to his life "up the hill" and away from poverty. He might pity the children for being so na�ve as to take "drooping dandelions" (worthless weeds) to their mothers, thinking they will be pleased at this. ...read more.

This leaves the reader feeling contented. "I Remember, I Remember" seems to end quite flippantly with "Oh well, I suppose it's not the place's fault". By saying "Oh well", Larkin seems to be dismissive. It seems odd to me that, after writing of how he resents his past, he can just forget it so quickly. It could be that he is being philosophical and does not want to dwell on the things that are in the past. The poet could also feel that as it is in the past, there is nothing that can be done about it now. This is contradictory to the meaning of the rest of the poem as it makes you wonder why he was thinking so much about his life if he can just dismiss it all in a single comment at the end. By also saying that "it's not the place's fault", Larkin lays the blame on himself for his childhood and fate. This also contradicts the rest of the poem, as he was previously blaming anyone but himself. In conclusion, I can say that Larkin presents his memories in a very bitter way, thus creating the feeling that he was unhappy as a child. Betjeman, however, presents his memories in a more nostalgic way and the way in which he wrote the poem makes every aspect of the memories seem grand. This indicates that he is happy with the memories he has. ...read more.