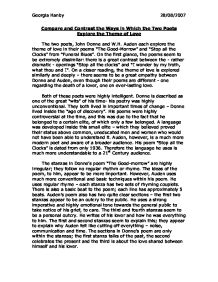 Compare and Contrast the Ways in Which the Two Poets (W.H. Auden and John Donne) Explore the Theme of Love

Compare and Contrast the Ways in Which the Two Poets Explore the Theme of Love The two poets, John Donne and W.H. Auden each explore the theme of love in their poems "The Good-Morrow" and "Stop all the Clocks" from "Funeral Blues". On the first glance, the poems seem to be extremely dissimilar: there is a great contrast between the - rather dramatic - openings "Stop all the clocks" and "I wonder by my troth, what thou and I". On a closer reading, the theme of love is explored similarly and deeply - there seems to be a great empathy between Donne and Auden, even though their poems are different - one regarding the death of a lover, one on ever-lasting love. Both of these poets were highly intelligent. Donne is described as one of the great "wits" of his time- his poetry was highly unconventional. They both lived in important times of change - Donne lived inside the "age of discovery". His poems were highly controversial at the time, and this was due to the fact that he belonged to a certain elite, of which only a few belonged. ...read more.

The word "let" is used repetitively - in much the same way in each poem. I think that the use of the word is almost imperative; one poet is instructing the world around him to stop and take notice, while one poet is instructing the discoverers to discover more worlds. Donne also uses the world "let" in a romantic way towards his lover - he wants their two worlds to become one. This is made clear in the line "Let us possesse one world, each hath one, and is one." Auden uses simple alliteration to add effect to the sound of the poem, whereas Donne does not, however, he uses reduplication - i.e. he repeats words to add effect to the sound of the poem. The imagery used in both of the poems is used to express the thoughts and feelings of the narrator. Auden appears to use very simple images, whereas Donne wrote more complex, extended metaphors and conceits. An interesting example of this is the metaphor of sleep Donne uses in the opening stanza of "The Good-Morrow". Donne uses a conversational tone and a highly unconventional use of the word "snorted" - this was extremely colloquial for the time it was written. ...read more.

It suggests that, after he has lost a love, he could never love again - there is no hope. The poem is very much based not on Auden himself, but the public and sometimes things unrelated and in his surroundings. (In contrast to the small room of Donne's poem). The poems I have studied seem rather dissimilar at first, but when deeply analysing the poems deeper similarities can be found, such as a similar metaphor. The feelings in both poems are strong and intense. However, I find that the contrasts outweigh the similarities - the poems are deeply dissimilar. First of all, Auden's poem is about the loss of a love, whereas Donne's poem celebrates the gaining of love. Both of the poems have a great deal of imagery which portrays the poets' feelings and to help the reader understand. However, the poets do this in entirely different ways. Auden uses simpler imagery and language than Donne which makes for easier reading - this helps a 21st Century audience to visualise his feelings more successfully. Donne's language imagery however appears to be more vibrant and complicated - it is less easy for a modern audience to understand, rather it appears to be an overall more effective poem. ?? ?? ?? ?? Georgia Hanby 28/08/2007 ...read more.