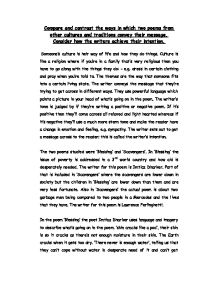 Compare and contrast the ways in which two poems from other cultures and traditions convey their message. Consider how the writers achieve their intention.

Compare and contrast the ways in which two poems from other cultures and traditions convey their message. Consider how the writers achieve their intention. Someone's culture is heir way of life and how they do things. Culture is like a religion where if you're in a family that's very religious then you have to go along with the things they do: - e.g. dress in certain clothing and pray when you're told to. The themes are the way that someone fits into a certain living state. The writer conveys the message that they're trying to get across in different ways. They use powerful language which paints a picture in your head of what's going on in the poem. The writer's tone is judged by if they're writing a positive or negative poem. If it's positive then they'll come across all relaxed and light hearted whereas if it's negative they'll use a much more stern tone and make the reader have a change in emotion and feeling, e.g. sympathy. ...read more.

The children aren't as fortunate as the children living in other wealthy countries and can't even get clothes 'naked children'. The issue of not having a lot of things is dealt with in 'Scavenger'. The garbage men lack essentials but they can't complain about their situation as they've got a home to go to and fresh, clean running water. The poem 'Scavengers' written by Lawrence Ferlinghetti, he talks about the differences between rich and poor and uses language and imagery to do this. There are two garbage men on a truck waiting at a stoplight when a Mercedes pulls up beside them. 'Bright yellow garbage truck', this is what the scavengers go to work in which isn't very attractive. On the other hand the two rich people go to work in a 'Mercedes'. The scavengers wear 'red plastic blazers' which is scruffy work clothing whereas the rich man is wearing a 'hip three-piece linen suit' and woman wearing a 'short skirt and coloured stockings'. The older scavenger has 'grey iron hair' meaning he doesn't look after it as it's become dull and wiry. ...read more.

The message the reader gets is first of all feeling sympathetic towards them as well as thinking how bad it would be if we were in their position with only basic materials. It would be to switch from the life we live now going to a poor less fortunate life. In 'Scavenger' the writer sets out to show the lives of two completely different people comparing the rich and the poor. They're from different backgrounds but the reality is that they were once children and the garbage men may have had a different life rather than the job they've got now. There are some signs of the writer wanting the reader to fell sympathy towards them. Also the message is that anything's possible if you put your mind to it. Both of the poems talked about achieve the writer's intention in what he wants the reader to know. In 'Blessing' the writer wants to show how much the children are desperately in need of water. Imtiaz Dharker does this well as the reader fells sympathy towards them. The poem 'Scavenger' written by Lawrence Ferlinghetti shows how different classes of people can quite easily have had different lives if they think carefully about what they're doing. ...read more.