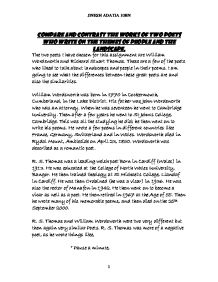 Compare and Contrast the Works of Two Poets Who Write On the Themes of People and the Landscape.

COMPARE AND CONTRAST THE WORKS OF TWO POETS WHO WRITE ON THE THEMES OF PEOPLE AND THE LANDSCAPE. The two poets I have chosen for this assignment are William Wordsworth and Richard Stuart Thomas. These are a few of the poets who liked to talk about landscapes and people in their poems. I am going to see what the differences between these great poets are and also the similarities. William Wordsworth was born in 1770 in Cockermouth, Cumberland, in the Lake District. His father was John Wordsworth who was an attorney. When he was seventeen he went to Cambridge University. Then after a few years he went to St John's College, Cambridge. This was all the studying he did; he then went on to write his poems. He wrote a few poems in different countries like France, Germany, Switzerland and in Wales. Wordsworth died in Rydal Mount, Ambleside on April 23, 1850. Wordsworth was described as a romantic poet. R. S. Thomas was a leading welsh poet Born in Cardiff (Wales) ...read more.

This poem is about a man standing on Westminster Bridge in London. He is describing everything he sees around him, all the ships, towers, domes and theatres. He is saying there is nothing better in this world at this moment than looking at this exquisite site. The site he is describing is, the smokeless air and the open field, he is also trying to tell us that this is wonderful fresh air. Nowhere else in this world would you get this, but of course this is not true. But Wordsworth is a more positive poet, of course you get fresh air in many other places and you get smokeless air open field, and many attractive buildings, in many other cities in the world. A piece by R. S. Thomas is the Tramp. This poem is saying the tramp at the door has nowhere to go and nothing to look forward to or nothing coming for him in the future. That's why he looks down at his feet, he is embarrassed, and he is also a peasant. ...read more.

Another of Thomas's poems is, A day in autumn; it is saying that the poem is showing the autumn beauty. "The air windless, a few last Leaves adding their decoration," The poet is affirmative that these are sights of such breathe taking beauties, will not last forever in will last maybe a few more weeks. He then writes that let the mind take its picture and remember this sight of such beauty and wear it against the hard cold. He means by this that when the weather is not so good maybe raining or snowing, that the mind can picture back to the lovely autumn day, and also to remember the fact that will come again next year. So as are able to see William Wordsworth was more of a positive poet where as R. S. Thomas was a negative poet. Another difference is Wordsworth wrote in the 19th and 20th century, where as Thomas wrote in the 21st century. Another difference is Thomas's work reflects on his childhood, where as Wordsworth's does not. The similarities between these two great poets were they both wrote on landscapes, people and nature. They also wrote fabulous poetry. JINESH ADATIA 10BN 1 ...read more.