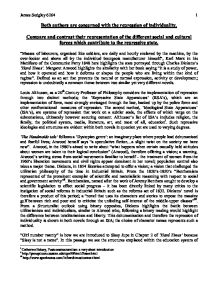 Compare and contrast their representation of the different social and cultural forces which contribute to the repressive state.

Both authors are concerned with the repression of individuality. Compare and contrast their representation of the different social and cultural forces which contribute to the repressive state. "Masses of labourers, organised like soldiers, are daily and hourly enslaved by the machine, by the over-looker and above all by the individual bourgeois manufacturer himself", Karl Marx in his Manifesto of the Communist Party 1848 here highlights the state portrayed through Charles Dickens's 'Hard Times'. Margaret Atwood highlights the similarity with her book saying "it is a study of power, and how it operated and how it deforms or shapes the people who are living within that kind of regime". Defined as an act that prevents the natural or normal expression, activity or development; repression is undoubtedly a common theme between two similar yet very different novels. Louis Althusser, as a 20th.Century Professor of Philosophy considers the implementation of repression through two distinct methods; the 'Repressive State Apparatuses' (RSA's), which are an implementation of force, most strongly envisaged through the law, backed up by the police force and other confrontational measures of repression. The second method, 'Ideological State Apparatuses' (ISA's), are systems of repression that work on a subtler scale, the effects of which verge on the subconscious, ultimately however securing consent. Althusser's list of ISA's includes religion, the family, the political system, media, literature, art, and most of all, educationi. Such repressive ideologies and structures are evident within both novels in question yet are used to varying degrees. 'The Handmaids tale' follows a 'Dystopian genre': an imaginary place where people lead dehumanised and fearful lives; Atwood herself says "a speculative fiction...a slight twist on the society we have now". Atwood, in the 1980's aimed to write about "what happens when certain casually held attitudes about women are taken to their logical conclusion" (Atwood), therefore offering a vision; a warning. Atwood's writing stems from social movements familiar to herself - the treatment of women from the 1960's liberation movements and civil rights appear dominant in her novel; population control also takes a major theme. ...read more.

He himself says, "We are so constituted. I was brought up in this catechism when I was very young, sir, as you are aware". Here Bitzer points out that the system of education prevents any way out, distilling the human instincts of capital gain. In comparison this sense of having no way out from repression is shown by the 'image clusters' in the language of Atwood's novel (hands/feet/faces/eyes/blood/wombs) - this language works in opposition to the polluted biblical manipulation of the regime and shows the only way out for Offred is through her imagination. Imagination has been removed from Bitzer in 'Hard Times' through education; he has been depersonalised in a way which is also very evident within Atwood's novel through RSA's. Depersonalisation is enforced by the state in 'The Handmaid's Tale' with the uniform that the Handmaids are forced to wear - the uniform represses sexuality and sensuality. The skirt is "ankle length", the b*****s "a flat yoke". The similitude of the uniform eradicates individualism to the extent that Offred begins to consider herself as 'we': "She's like my own reflection...from which I am moving away". This implication that she is losing touch with her identity by moving away highlights the success of this repressive force. The uniforms worn can be associated with uniforms of armies and law-enforcers such as the police. In this way it can be interpreted that by wearing set uniforms the handmaid's are policing themselves. As Dickens uses his novel to strengthen the theory of Benthamism Atwood too uses techniques like the manipulation of uniforms to make a social statement. Living through the 1960's/70's Atwood witnessed the liberation of women in the U.S. and the wider civil rights movements around the globe such as racial equality. The uniforms are just one example of how Atwood is showing the dangers of pursuing a regime of unfair liberation. We can see the success of the uniforms as a repressive force through the change in Offred's nature when "I take my clothes off". ...read more.

The lack of RSA's within this novel clearly indicates that Dickens did not wish to deal with repression on a physical level; ideology is stronger in this novel than in 'The Handmaid's Tale'. Karl Marx, essentially an ideologist would evaluate 'Hard Times' in a similar way to George Bernard Shaw who said the novel is a "denunciation of our entire social system". The lack of freedom within this system was the source of Marx's theory of mass revolution. The systems of repression are too strong for any alternative way out shown by Louisa's conversion to fellowship at the end of the novel. Although this could be interpreted as Dickens maintaining the social order by not revolting I believe Dickens is in fact showing how strong the social system is and that attempting to create change is unrealistic. The novels share several fundamental similarities when showing the social and cultural forces which contribute to repression; uniforms, education, religion and names, however, ultimately they are used for different objectives. The futuristic setting of 'The Handmaid's Tale' allows for speculative interpretation of where our society is heading today and therefore gives warning by taking the RSA's of today's society and taking them to their logical conclusions. 'Hard Times' from a modern perspective is talking about the past and is therefore very real to a 21st.Century reader. The predominant use of ISA's in his novel shows how he represents the strength of repression through the mind - "the novel has seemed to many critics a symbolic and poetic work"iv; one which today we can see the logic to. In future years a similar relevance may be found from Atwood's novel however the reality of the repressive forces within her novel seem much more distant to a modern audience relying on the imagination which contrasts with 'Hard Times'; fundamentally based on historical reality. i Catherine Belsey, Postconstructuralism a very short introduction ii http://panopticon.csustan.edu/cpa99/html/fraser.html iii http://www.sparknotes.com/lit/hardtimes/context.html iv York notes advanced, Hard Times, Charles Dickens. 1 James Sedgley 6264 ...read more.