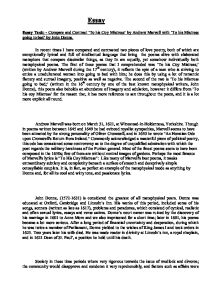 Compare and Contrast 'To his Coy Mistress' by Andrew Marvell with 'To his Mistress going to bed' by John Donne.

Essay Essay Task: - Compare and Contrast 'To his Coy Mistress' by Andrew Marvell with 'To his Mistress going to bed' by John Donne. In recent times I have compared and contrasted two pieces of love poetry, both of which are exceptionally lyrical and full of intellectual language that bring the poems alive with elaborated metaphors that compare dissimilar things, as they In are equally, yet somehow individually both metaphysical poems. The first of these poems that I comprehended was 'To his Coy Mistress;' (written by Andrew Marvell during the 17th century), it reflects the epic of a man who is striving to entice a unadulterated woman into going to bed with him; he does this by using a lot of romantic flattery and surreal imagery, positive as well as negative. The second of the two is 'To his Mistress going to bed;' (written in the 16th century by one of the best known metaphysical writers, John Donne), this poem also beholds an abundance of imagery and adulation, however it differs from 'To his coy Mistress' for the reason that, it has more reference to sex throughout the poem, and it is a lot more explicit all round. Andrew Marvell was born on March 31, 1621, at Winestead-in-Holderness, Yorkshire. Though in poems written between 1645 and 1649 he had evinced royalist sympathies, Marvell seems to have been attracted by the strong personality of Oliver Cromwell, and in 1650 he wrote "An Horatian Ode upon Cromwell's Return from Ireland." ...read more.

poem to flow better and creates the precise tone to fit into what is being communicated from the positive towards the negative, where he seems to get agitated by the fact that the woman he has fallen for, isn't willing to loose her virginity, and so he begins to insult her in a way. 'My echoing song: then worms shall try That long preserved virginity.' He makes the poem sound a lot less realistic and quite witty, however on the other hand you could say he's trying to personify his anger through subtle joke-like imagery, because he is personally uncomfortable, or maybe even in denial of the fact that he may get rejected yet again, as it seems he has tried to gain her attention more than once. In 'To his Mistress going to bed,' the intonation is unquestionably a lot slower, for the first reason that it doesn't refer to time as such, and it creates the mood through blissful and serene imagery, an example of this is, "A heaven like Mahomet Paradice and though Ill spirits walk in white, we easly know," this line represents the Mahomet's Paradice which is mythically said to be filled with carnel pleasures meaning happiness and ecstasy, he then goes onto talk about how he visualize this pleasure and defines as his physical desires. Donne uses mythical images to make the woman feel like she is in somewhat in a disillusionment mood, in other words he is basically romancing her until she goes into bed with him. ...read more.

I suppose Donne does this to allow the reader to think beyond the ending of the poem; it's not exactly a cliff-hanger but allows the reader to make up his or her own visual ending; it's rather optimistic to say that the man in the poem did get the woman, because although he might of seemed not in control, he always was. 'What needst thou more covering then man,'- Donne is practically using some form of reverse psychology, as he's letting the women think she's in power by his act of taking his clothes of first, but then he's basically saying, because I've taken my clothes off, you should do the same; so it's easy to say that really, he was always in charge of what was happening. In conclusion I found both Donne's and Marvell's poetry quite amusing and in some ways comical, I say this for the reason that, you wouldn't find many men writing love letters and poems to the girl they may adore or even love nowadays, because over time or even five centuries, people change, peoples' habits change and so do the way of their love life. However, as a female, I still find a love letter or even a poem, is far more affectionate than a box of chocolates ever could be, and I also believe that behind every successful man is a woman, as Donne and Marvell have marked their places in history by writing about the mysterious mistress that they fell in love with, and we're reading about in the 21st century. ...read more.