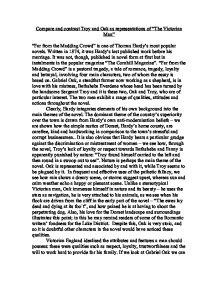 Compare and contrast Troy and Oak as representations of

Compare and contrast Troy and Oak as representations of "The Victorian Man" "Far from the Madding Crowd" is one of Thomas Hardy's most popular novels. Written in 1874, it was Hardy's last published work before his marriage. It was not, though, published in novel form at first but in instalments in the popular magazine "The Cornhill Magazine". "Far from the Madding Crowd" is a pastoral tragedy, a tale of romance, tragedy, loyalty and betrayal, involving four main characters, two of whom the essay is based on. Gabriel Oak, a steadfast farmer now working as a shepherd, is in love with his mistress, Bathsheba Everdene whose head has been turned by the handsome Sergeant Troy and it is these two, Oak and Troy, who are of particular interest. The two men exhibit a range of qualities, attitudes and actions throughout the novel. Clearly, Hardy integrates elements of his own background into the main themes of the novel. The dominant theme of the country's superiority over the town is drawn from Hardy's own anti-modernisation beliefs - we are shown how the simple rustics of Dorset, Hardy's home county, are carefree, kind and hardworking in comparison to the town's stressful and corrupt businessmen.. ...read more.

They are taken in by Troy's charm and good looks and then left by the wayside for Troy's other vices to take centre stage - we see at the end that he really loves Fanny but his emotion comes all too late (in mourning for Fanny's death). Again, the reader has the omniscient view through Hardy's use of dramatic irony warning against Bathsheba's initial impression of Troy. Bathsheba is worn down from a proud and well-held member of the public to an upset, weak being, hanging on Troy's every word - "...kiss me too, Frank-kiss me" (p283) - helpless to do anything about his mistreatments of her. Boldwood is seen to be of reputable character at the start of the novel, when described to Bathsheba by Liddy - "A gentleman farmer at Little Weatherbury"(p72). He is at first "stern-looking"(p72). Boldwood's downfall is Bathsheba's valentine, which she wrote to him in jest, but tore this "hopeless man for a woman" (p 72) to pieces. We watch as he becomes desperate for Bathsheba's affection, and her hand in marriage, so much so she feigns acceptance of his proposals to stop his pestering. Because of this, Boldwood challenges the Victorian stereotype of a man, but not by being daring, or charming, like Troy, but by becoming desperate, and losing his pride. ...read more.

The imagery here is all of strong colour and harsh sounds and establishes a character who is intrusive and almost dangerous as well as attractive. Our last impression of Troy comes from his final words before he is shot by Boldwood: " 'Come home with me: Come!...Come, madam, do you here what I say?' he said peremptorily." We notice that his language and manner are harsh and almost violent, which is significant in his characterisation. In contrast, the final words spoken by Oak on the last page of the novel are typically gentle and generous: " 'Thank ye; thank ye all...A bit and a drop shall be sent to Warren's for ye at once.' " In the end, the reader can see how good has triumphed in the form of Gabriel Oak. This play on good and evil is also quite suggestive as to Hardy's beliefs of the evils of industrialisation. The novel is a very moral one; one between the hurtful antics of Troy, and the stoic love and care of Oak, with people such as Bathsheba, Fanny and Boldwood getting caught up in the middle. Superficially, there are similarities between the two men, but we can see that the contrast is a lot larger. Hardy's novel "Far From the Madding Crowd" provokes deep and moral thinking from its readers, leaving an impression of its ending on the consciences of readers. ...read more.