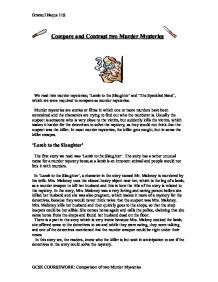 The detectives investigate the house, but Dr. Roylott seems very wary and tells them to go away. The detectives ignore the warning from Dr. Roylott and carry on investigating behind his back. Soon they find a few clues to how Julia died and when they go and search through Dr. Roylott's room, they find a very deadly and poisonous snake, which had lots of colourful dots on its skin. This is the final clue they needed and then the put all their clues together and worked out that Dr. Roylott was the mastermind behind the tragic death of Julia. In this story we do not know who is responsible for Julia's death until the end, and read on with eagerness to see if the famous detective could unravel the real story behind the scenes. The two killers are so different. Dr. Roylott, a doctor, who had been in India, did time for having killed his butler in a fit of temper; he had two exotic pets, a baboon and a cheetah and was friends with gypsies. These clues were sufficient for the detective and the reader to identify a possible murderer. ...read more.

She is excessively possessive and cracks when he tells her he wants to leave her, killing him with one blow to the head with the raw leg of lamb she was about to cook for his dinner. Similarly Conon-Doye is the master of description. He adds detail upon detail to give us a clear picture of a killer in Dr. Roylott; a doctor with a large practice in Calcutta, India; beating his butler to death after the servant completed a series of robberies; making a marriage of convenience to get money, a violence of temper making him quarrel ferociously with his neighbours; friendly with a band of gypsies and the owner of exotic pets. Dr. Roylott's home in the country is also clearly described: "the building of grey lichen-blotched stone with a high central position, and two curving wings, like the claws of a crab, thrown on each side. 'Lamb to the Slaughter' ends ironically, with Mrs. Maloney, the killer, giggling when she hears one of the detectives eating the lamb, say: "Personally right under our very noses" (this refers to the leg of the lamb). 'The Speckled Band' ends with the killer getting his own medicine; the death he planned for the second sister boomeranged on him. Ikramul Haque 11S GCSE COURSEWORK: Comparison of two Murder Mysteries ...read more.