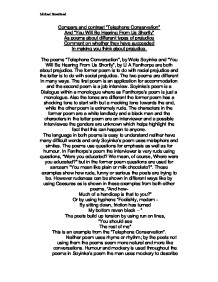 Compare and contrast "Telephone Conservation" And "You Will Be Hearing From Us Shortly" As poems about different types of prejudice Comment on whether they have succeeded In making you think about prejudice. The poems "Telephone Conversation", by Wole Soyinka and "You Will Be Hearing From Us Shortly", by U A Fanthorpe are both about prejudice. The former poem is to do with racial prejudice and the latter is to do with social prejudice. The two poems are different in many ways. The first poem is an application for accommodation and the second poem is a job interview. Soyinka's poem is a Dialogue within a monologue where as Fanthorpe's poem is just a monologue. ...read more.

We mean, of course, Where were you educated?" but in the former poem questions are used for sarcasm "You mean like plain or milk chocolate?". These examples show how rude, funny or serious the poets are trying to be. However rudeness can be shown in different ways like by using Caesuras as is shown in these examples from both either poems, "And how- Much of a handicap is that to you?" Or by using hyphens "Foolishly, madam - By sitting down, friction has turned My bottom raven black - " The poets build up tension by using run on lines, "You should see The rest of me" This is an example from the "Telephone Conservation". ...read more.

Red pillar box. Red double-tiered." In You Will Be Hearing From Us Shortly alliteration is used to discriminate the persons address "We do not Ask what domestic disasters shimmer Behind that vaguely unsuitable address" My conclusion is I prefer the Telephone Conversation because the man at the other end of the phone gets to voice his disagreement where as in You Will Be Hearing From Us Shortly doesn't. Also YWBHFUS is an extremely ironic title, as the person will definitely not be hearing them from the interviewer. The former poem seems to be based in the sixties at the earliest because of the red double Decker bus and the red telephone box. Overall they are both of r****t views though at least in one the person has a chance. Michael Broadhead ...read more.