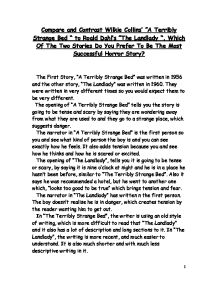 Compare and Contrast Wilkie Collins' &quot;A Terribly Strange Bed &quot; to Roald Dahl's &quot;The Landlady &quot;. Which Of The Two Stories Do You Prefer To Be The Most Successful Horror Story?

As of this he has no reactions towards danger and suspects nothing. I consider the boy in "The Terribly Strange Bed" to be the better victim because he finds out what is happening and there is more tension and excitement when his feelings are shown, when he is almost, about to die, when in "The Landlady", the boy doesn't suspect anything. In both stories, both main villains appear to be pleasant and nice but they are not really as they seem. In "The Terribly Strange Bed", the villain is the old soldier. At the start, he is very nice to the boy. When the boy is gambling he keeps saying, "Break the bank, you can do it!" persuading the boy to win the money and it gives him more confidence to win. The boy thinks he wants him to win for himself, but really he wants him to win so he can steel it off him later on. When the boy wins, he keeps saying, "Look after it!" and "be careful with it!" making the boy think he cares for him. Also when they are in the pub, the old soldier says, "have a drink to celebrate", making him drunk, so he can take advantage of him. ...read more.

When he comes out of the bed, the tension is low, but when you realise h has to escape from the building, the tension rises again. In "The Landlady", the tension is rising all the time and it doesn't fall. It gradually rises as you get more clues and find out more about the lady and what she is up to. It is at its peak right at the end when we are left top imagine what is going to happen. I consider "The Landlady", to be the better horror story, because you are left to imagine what is going to happen to the boy and it scares you a bit, but in "The Terribly Strange Bed", everything is revealed at the end, and it is more of a detective story than a horror story. Also in "The Landlady", it says the lad stuffs animals when they die, so you could think she will murder the boy and stuff him. I think "The Landlady", is the most enjoyable to read, because it is more interesting, and in "The Terribly Strange Bed", there are too many long, descriptive parts which drags it out and makes it boring. Also "The Landlady", is written in a newer style of writing so it is much easier to read. Tom Evans. 1 ...read more.