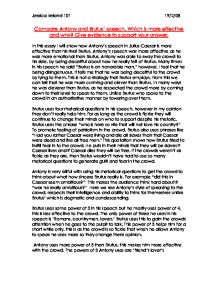 Compare Antony and Brutus speech. Which is more effective and why? Give evidence to support your answer.

Compare Antony and Brutus' speech. Which is more effective and why? Give evidence to support your answer. In this essay I will show how Antony's speech in Julius Caesar is more effective than his rival Brutus. Antony's speech was more affective as he was more emotional than Brutus. Antony was able to sway the crowd to his side, by being deceitful about how he really felt of Brutus. Many times in his speech he said "Brutus is an honorable man," however, I feel that he being disingenuous. It tells me that he was being deceitful to the crowd by lying to them. This is not a strategy that Brutus employs. From this we can tell that he was more cunning and clever than Brutus. In many ways he was cleverer than Brutus, as he respected the crowd more by coming down to their level to speak to them. Unlike Brutus who spoke to the crowd in an authoritative manner by towering over them. ...read more.

This power of 3 helps him for a short while only, this is as the crowd is so fickle that when he allows Antony to speak he uses more so they change there opinion. Antony uses more power of 3 than Brutus, this makes him more effective with the crowd. The powers of 3 Antony uses are 'friend's lover's countrymen.' Antony uses this at the beginning of his speech. This helps him with respect that the crowd feels towards him. Another one that Antony uses is when he describes Caesar he uses 'friend, faithful, and just.' This makes the crowd realize how Antony really felt toward Caesar, and how close they were. In Antony's speech he uses 3 very skilful props. One Caesar's body, In my opinion this helps him get the crowds attention before he starts speaking as they can see what the traitors have done to Caesar. As Brutus finishes his speech we are told that Antony has come out to the pulpit carrying Caesars body. ...read more.

This makes the speech very weak as it's less interesting and less appealing to the crowd. Brutus uses some pauses for effect. He uses his pauses after his 4 rhetorical questions. But he doesn't just pause he tells them, he said to them 'I pause for a reply.' This is very different to Antony as he tells them he will pause where Antony just waits. In conclusion to this essay I feel that Antony has a stronger speech than Brutus. I feel that Antony has a stronger speech as he uses very strong props to gain the crowds attention, he also uses many different ways to make his point of how he feels of Brutus and Caesar. I also feel that he has a stronger way with the crowd by coming down to their level instead of towering above them. Although Brutus uses more stronger rhetorical questions Antony use rhetorical questions that make the crowd think about what Brutus has said and if it was true or not. ?? ?? ?? ?? Jessica Ireland 10T 19/2/08 ...read more.