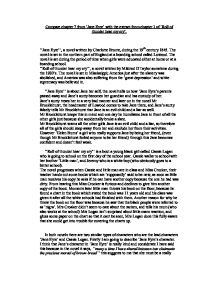 Compare chapter 7 from 'Jane Eyre' with the extract from chapter 1 of 'Roll of thunder hear my cry'.

Compare chapter 7 from 'Jane Eyre' with the extract from chapter 1 of 'Roll of thunder hear my cry'. ''Jane Eyre'', a novel written by Charlotte Bronte, during the 19th century 1845. The novel is set in the northern part of England at a boarding school called Lowood. The novel is set during the period of time when girls were educated either at home or at a boarding school. ''Roll of thunder hear my cry'', a novel written by Mildred D Taylor sometime during the 1930's. The novel is set in Mississippi; America just after the slavery was abolished, and America was also suffering from the 'great depression' and white supremacy was believed in. ''Jane Eyre'' is about Jane her self, the novel tells us how 'Jane Eyre's parents passed away and Jane's aunty becomes her guardian and has custody of her. Jane's aunty treats her in a very bad manner and later on in the novel Mr Brocklehurst, the headmaster of Lowood comes to take Jane there, and Jane's aunty falsely tells Mr Brocklehurst that Jane is an evil child and a liar as well. Mr Brocklehurst keeps this in mind and one day he humiliates Jane in front of all the other girls just because she accidentally broke a slate. Mr Brocklehurst warns all the other girls Jane is an evil child and a liar, so therefore all of the girls should keep away from her and exclude her from their activities. However 'Helen Burns' a girl who really supports Jane by being her friend, (even though Mr Brocklehurst forbid anyone to be her friend) ...read more.

Mr Brocklehurst is the church representative, which probably explains why he calls Jane 'evil' when he's humiliating her. I also get the impression that he doesn't really care about the girls, he doesn't treat them right and he's tight on money, 'that a lunch, consisting of bread and cheese has been served out to the girls...how is this'' here Mr Brocklehurst is saying that its unacceptable for the girls to have lunch even though they're hungry, this shows he's tight on money. 'Bringing up these girls isn't to accustom them to habits of luxury and indolence' this shows that Mr Brocklehurst isn't really bothered about the girls as long as they are still alive. Miss Crocker, Cassie's teacher, is the same type of character as Mr Brocklehurst, but not as mean as him, she has a gentle side as well, 'To all you fourth graders, it's good to have you in my class'. However Miss Crocker isn't kind all the time I think that she's bossy by the way she speaks to the class, ' we shall work work work...' Miss Crocker also accepts the r****m, 'that's what you are she said coldly', she says this to little man soon after he discovers that the books handed out were old and only given to his school because the white schools finished with them. I also think that Miss Crocker isn't an understanding person and she doesn't really care about the students, 'all right Cassie, she sighed, turning to me, come and get yours' this is said to Cassie after she doesn't want a book, and she stands up for little man. ...read more.

I found this quote effective in the way that Jane's been badly humiliated for something as little as braking a slate, I think this also shows how stingy Mr Brocklehurst is on money because the slate can be replaced with a new one, but he has to shout at Jane instead. ''Roll of thunder hear my cry'', the parts that I found moving in this novel are, is when Cassie says to Miss Crocker, 'see miz Croaker, see what it says they give us these books when they don't want 'em no more'. Miss Crocker doesn't really care that the books given are old and the leftovers of white schools, I found that really moving because it was sad to see that Miss Crocker accepted the fact that the school got old books and she accepts the r****m towards black people. Another thing that I find really sad is when Miss Crocker reacts to Cassie after she points out people of her race are labelled as 'nigra'. Miss Crocker's reaction is, 'that's what you are', and after reading that I felt really shocked and dismayed that Miss Crocker was cold enough to say that, not forgetting that she's a black person to. I felt as if she was betraying her own culture. After reading chapter 7 in ''Jane Eyre'' and chapter 1 of ''Roll of thunder hear my cry'', I preferred 'Jane Eyre' better, I think I like 'Jane Eyre' because I find 'Jane Eyre's character interesting, by the way that when I was reading that novel it made me want to read more of the book. ...read more.