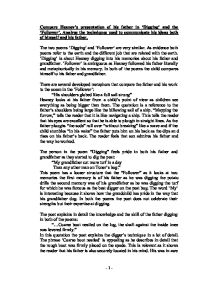 Compare Heaney's presentation of his father in 'Digging' and the 'Follower'. Analyse the techniques used to communicate his ideas both of himself and his father.

Compare Heaney's presentation of his father in 'Digging' and the 'Follower'. Analyse the techniques used to communicate his ideas both of himself and his father. The two poems 'Digging' and 'Follower' are very similar. As evidence both poems refer to the earth and the different job that are related with the earth. 'Digging' is about Heaney digging into his memories about his father and grandfather. 'Follower' is ambiguous as Heaney followed his father literally and metaphorically in his memory. In both of the poems the child compares himself to his father and grandfather. There are several developed metaphors that compare the father and his work to the ocean in the 'Follower': "His shoulders globed like a full sail strung" Heaney looks at his father from a child's point of view as children see everything as being bigger than them. The quotation is a reference to the father's shoulders being large like the billowing sail of a ship. "Mapping the furrow," tells the reader that it is like navigating a ship. ...read more.

His was in awe when he saw his father use the spade, as he was amazed he could use a spade as well as his father. Heaney feels that he was too inadequate to ploughing as he was always stumbling and was always clumsy: "I wanted to grow up and plough, To close one eye, stiffen my arm." Heaney's view of farming is of imitating the father's actions as the title of the poem 'Follower' tells the reader that he is a child impersonating his father. The child recalls his father's admiration of him when he was younger, but now his father walks behind him. This metaphor runs through the poem, but now the positions are reversed. "Stumbling behind me, and will not go away" his father is not literally behind him, but he is troubled by his memory perhaps because he feels guilt at not carrying on the tradition of farming, or he feels he can not live up to his father's example. When the child compares himself to his father and grandfather he is very negative in both of the poems: "Once I carried him milk in a bottle Corked sloppily with paper." ...read more.

There is a one main metaphor, which has been extended throughout the whole poem: "When the spade sinks into gravely ground:" This central extended metaphor of digging and roots shows how the poet in writing is digging back into his roots finding his identity and where his family comes from. The poem is just beginning when it ends, but only at the end does he see the pen as a weapon for digging not literally but metaphorically in his mind. The main theme in both of the poems is the child looking back into his past and watching his father work on the farm. The child presents his father as a man who is hard working and he never feels tried even if he does have his son on his back. The child presents himself as clumsy and a nuisance as he was always yapping away. I enjoyed the poem 'Digging' because I liked how he begun and ended the poem with the same line. I also liked the way that he said that he could use the pen as a weapon the write the truth. - 1 - ...read more.