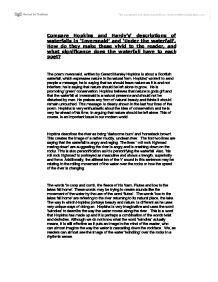 Compare Hopkins and Hardys descriptions of waterfalls in Inversnaid and Under the waterfall. How do they make these vivid to the reader, and what significance does the waterfall have to each poet?

Compare Hopkins and Hardy's' descriptions of waterfalls in 'Inversnaid' and 'Under the waterfall'. How do they make these vivid to the reader, and what significance does the waterfall have to each poet? The poem Inversnaid, written by Gerard Manley Hopkins is about a Scottish waterfall, which expresses nature in its natural form. Hopkins' wrote it to send people a message, he is saying that we should leave nature as it is and not interfere; he is saying that nature should be left alone to grow. He is promoting 'green' conservation. Hopkins believes that nature is gods gift and that the waterfall at Inversnaid is a natural presence and should not be disturbed by man. He praises any form of natural beauty and thinks it should remain untouched. This message is clearly shown in the last four lines of the poem. Hopkins is very enthusiastic about the idea of conservation and he is very far ahead of his time, in arguing that nature should be left alone. This of course, is an important issue in our modern world. Hopkins describes the river as being 'darksome burn' and 'horseback brown'. This creates the image of a rather muddy, unclean river. ...read more.

The water evokes and fetches back memories from their 'thickening shrouds of gray' (sic). The use of the word shroud implies ideas of a killing, suggesting the memories have been killed of and had to return to the past, however, by plunging her hand into water she in effect, 'saves' these memories from being lost. She remembers things that once happened with delight but at the same time she is sad as it was all in the past and she cannot relive it. Hardy suggests that the woman previous experiences in love have not been ones of a happy kind, and that she has had little luck with romance in the past. The bad relationships she has had in the past have left her afraid and cautious for the future. The woman in the poem speaks about a secret, which only her and her lover know about. We can tell that it is a secret from the line 'Though precisely where no-one ever has known'. This suggests it is hidden and protected. Only the lovers are able to bond over this covert object. The woman is speaking about a drinking glass she once dropped into the waterfall. ...read more.