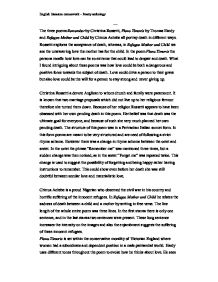 The three poems Remember by Christina Rossetti, Plena Timoris by Thomas Hardy and Refugee Mother and Child by Chinua Achebe all portray death in different ways. Rossetti explores the acceptance of death, whereas, in Refugee Mother and Child we see the unwavering love the mother has for the child. In the poem Plena Timoris the persona recalls how love can be so extreme that could lead to despair and death. What I found intriguing about these poems was how love could be both a dangerous and positive force towards the subject of death. Love could drive a person to their grave but also love could be the will for a person to stay strong and never giving up.

Christina Rossetti a devote Anglican to whom church and family were paramount. It is known that two marriage proposals which did not live up to her religious fervour therefore she turned them down. Because of her religion Rossetti appears to have been obsessed with her own pending death in this poem. Her belief was that death was the ultimate goal for everyone, and because of such she very much planned her own pending death. The structure of this poem was in a Pertrachan Italian sonnet form. In this form poems are meant to be very structured and are need of following a strict rhyme scheme. However there was a change in rhyme scheme between the octet and sestet. In the octet the phrase “Remember me” was mentioned three times, but a sudden change was then noticed, as in the sestet “Forget me” was repeated twice. This change is used to suggest the possibility of forgetting and being happy rather having instructions to remember. This could show even before her death she was still doubtful between secular love and materialistic love.

Chinua Achebe is a proud Nigerian who observed the civil war in his country and horrific suffering of the innocent refugees. In Refugee Mother and Child he relates the sadness of death between a child and a mother by writing in free verse. The line length of the whole entire poem was three lines. In the first stanza there is only one sentence, and in the last stanza two sentences were present. These long sentence increases the intensity on the images and also the enjambment suggests the suffering of these innocent refugees.

Plena Timoris is set within the conservative morality of Victorian England where women had a subordinate and dependent position in a male patriarchal world. Hardy uses different tones throughout the poem to evoke how he thinks about love. He sees love in a very cynical view and is making an effort in portraying love is not everlasting but tragic and indecisive. In the first stanza the use of alliteration in “the lovers looked over” emphasizes love was lyrical and a harmony of life by the “l” sound produced. But in the second stanza onwards there was a sudden transition and the change of tone was turned emotionless and insensitive. From the phrase, “There’s a woman in the canal below” there is a sense of bluntness and matter of fact to it. This sudden contrast of tones between the stanzas just enforces how Hardy thinks about love. The rhyme scheme of this poem does not change, the structure is: “abbab, cddcd”. It is in a strict and orderly fashioned. This rhyme scheme reflects how Hardy feels abut love and death. That love would have happy times but at the end it will just lead to despair. Also by having such a strict rhyme scheme it also suggest how Hardy views women opinion in love. As this structure is so old fashioned it provides a kind of security and how the future is being set. This may be very well how women in the male patriarchal world viewed love therefore he viewed love in such a cynical way.

In the poem Remember, Rossetti portrays death as an eternal and a beautiful thing, instead of fearing death like the other two poems. The persona appears to have been planning and waiting for her own pending death. Rossetti uses strong imagery to reveal about how she feels about death. The opening two lines of this sonnet “Remember me when I am gone away, Gone far away into the silent land” gives an idea of how she hints that she is dying. The phrase “silent land” could be translated as a cemetery or individual grave. It can also be seen as a metaphor as the phrase also suggests calm after life. All these techniques used by Rossetti could be seen that she is using euphemism to make death sound less harsh, and instead it is a goal that should be achieved by everyone.

Whereas in the poem Refugee Mother and Child, Achebe reflects the sadness of death by creating a tragic atmosphere. This poem does so by introducing shocking images and strong words. In this poem it is full of pathos; it is a very emotional poem. The alliteration used in: “struggling in labored steps behind blown empty bellies” evokes a sense of harshness, as the “b” sound which is constantly repeated makes a very plosive sound. The juxtaposition used in “the rust – colored hair left on his skull” emphasizes how horrific death is towards the child. Not only is this phrase very descriptive but it also seems to describe the layers of death. It is very photo journalistic which makes the atmosphere very tragic and grave.

In Plena Timoris death is conveyed in the strong imagery created by Hardy. The negative imagery in “And her arm dropt” symbolizes how because the woman in the poem sees love could lead to death it is in fear of it, therefore there is a loss of affection towards the man. The alliteration in “dim dreads” and “slowly sees” portrays a sense of insecurity coming from the woman. As she slowly sees how extreme love could lead the despair and death. Lastly, the phrase “till an arm upbore” in stanza two is a horrifying image. The word upbore gives a sense of death and the whole phrase conveys a sense of fear towards the subject death as it is being described as horror and terror.

In Remember the poem creates a huge impact on readers. It is a poem which is very memorable. This is because Rossetti describes death in a very different way than most poets therefore standing out from the other poems. The repetition in this poem emphasizes the point of her point of view and the confusion between her religion and materialistic love. The phrases “Remember me” and “Forget me” was repeated a number of times and because of such it plays a great role in the poem. As it gives an impression on how Rossetti is judging between her church and her religious fervor.

The strong descriptive imagery in the poem Refugee Mother and Child and the choices of word Achebe chooses makes this poem have a very strong impact on the reader. The beginning of the poem where allusion is used in: “No Madonna and Child could touch” by referring to a famous painting of Jesus and Mother Mary, emphasizes the point of love between the bonds of the mother and child very strongly. Also the strong imagery in “her eyes the ghost of a mother’s pride” gives an impression of how the mother is hanging onto the child’s life and as the child dies something inside the mother is dying too. These strong images are used often in Achebe’s poem, and because of such his poem have a strong impact on readers and this poem is very memorable.

In Hardy’s poem it was very effective as the negative poetic techniques he uses describes about love in a very vivid and strong, also Plena Timoris gives an impact to readers because it shows very clearly the differences between love and death. The juxtaposition in” till hopeless despair began” gives a contrast between hope. By this phrase love is being described very negatively, and because of this the poem is very vivid in the readers mind. Also in the phrase “the girl’s heart shuddered; it seemed as to free her”. The semi colon used in this phrase is an intended pause to emphasize the sense of the women’s heart actually shuddering. Plena Timoris creates a strong impact on readers as the descriptive words he chooses allows the reader to imagine clearly what is happening.

Personally I liked Refugee Mother and Child the most because Achebe boldly states that the human spirit and dignity of the Nigerian mother and the love she has for the child is greater than anything comparable in the Christian world. Though Hardy’s and Rossetti’s poem was not unforgettable pieces of work, I think Achebe’s is the better one because his comparisons stood out more than the ones Hardy had. Also the imagery he had and alliteration was stronger than Rossetti’s. By reading Achebe’s poem I felt and sympathized for the mother and child, and I thought the poets point was put forward very clearly on love and how strong it can be.