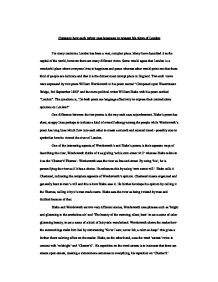 Compare how each writer uses language to present his views of London For many centuries London has been a vast, complex place. Many have described it as the capital of the world, however there are many different views. Some would agree that London is a wonderful place where everyone lives in happiness and peace whereas other would point out that those kind of people are delirious and that it is the dirtiest most corrupt place in England. Two such views were expressed by two poets William Wordsworth in his poem named "Composed upon Westminster Bridge, 3rd September 1802" and the more political writer William Blake with his poem entitled "London". The questions is, 'Do both poets use language effectively to express their contradictory opinions on London?' One difference between the two poems is the way each uses enjambrement. Blake's poem has short, snappy lines perhaps to indicate a kind of overall lethargy among the people while Wordsworth's poem has long lines which flow into each other to create a smooth and relaxed mood - possibly also to symbolise how he viewed the river of London. ...read more.

An intriguing observation is that both poets talk of glamorous and gracious buildings, but the context they are mentioned in changes their whole meaning. Wordsworth describes them as being 'Open unto the fields and to the sky;' indicating a certain freeness and naturalness, he is saying that buildings can be natural if natural is synonymous with good, as Blake's man made is synonymous with bad. Blake uses 'Palace' with 'blood' and 'Church' with 'black'ning', he is indicating that the people of the Church have gone against it's morals and the people of the Palace are sending soldiers to their death for unworthy reasons. Blake and Wordsworth set two very different scenes, Wordsworth uses phrases such as 'bright and glistening in the smokeless air' and 'The beauty of the morning; silent, bare' to set a scene of calm glistening beauty, to set a scene of a kind of fairy-tale wonderland. Wordsworth shows the reader how the surroundings make him feel by commenting 'Ne'er I saw, never felt, a calm so deep!' ...read more.

river glideth at his own sweet will'), the city ('This city now doth like a garment wear', 'The very houses seem asleep!') and the sun ('In his first Splendour'). Wordsworth, whilst making it evident that there is no one around but himself, is saying the city, the river and the sun are all entities of which he has just met and thinks highly of them. In conclusion, both poets are high-quality writers who know how to use language effectively to enhance their views. Although Blake is a deeper, darker and more political writer and his poem seems to be the better of the two, Wordsworth poem does have complexity going to a slightly deeper level than Blake's but it seems naive and idealistic. Blake uses simple rhyme schemes and repetition to develop his opinion but Wordsworth uses a more complex rhyme scheme whilst subtly personifying parts of the city. With that said, both artists were good at what they did and both can use language to successfully articulate their attitudes toward London. ?? ?? ?? ?? ...read more.