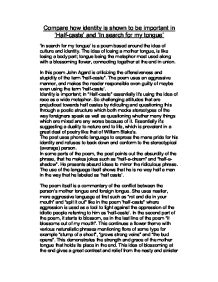 Compare how identity is shown to be important in 'Half-caste' and 'In search for my tongue' 'In search for my tongue' is a poem based around the idea of culture and identity. The idea of losing a mother tongue, is like losing a body part; tongue being the metaphor most used along with a blossoming flower, connecting together at the end in union. In this poem John Agard is criticizing the offensiveness and stupidity of the term "half-caste". The poem uses an aggressive manner, and makes the reader responsible even guilty of maybe even using the term 'half-caste'. Identity is important; in "Half-caste" essentially it's using the idea of race as a wide metaphor. ...read more.

He presents absurd ideas to mirror the ridiculous phrase. The use of the language itself shows that he is no way half a man in the way that he labeled as 'half caste'. The poem itself is a commentary of the conflict between the person's mother tongue and foreign tongue. She uses nastier, more aggressive language at first such as "rot and die in your mouth" and "spit it out" like in the poem 'half-caste" where aggression is used as a tool to fight against the oppression of the idiotic people referring to him as 'half-caste'. In the second part of the poem, it starts to blossom, as in the last line of the poem "it blossoms out of my mouth". ...read more.

The poet explores light-hearted quips of two famous people, Picasso and Tchaikovsky, turning his seriousness into a joke. The second half of the poem really focuses on the reader again, and a more aggressive approach to what seems to be so important to the poet; his identity. 'In search for my tongue' mimics 'half-caste' in many ways, this time the poem starts off aggressive and nasty, but ends more lightheartedly. The identity is stamped in the middle of poem with a breakout of the mother tongue in a dream, this shows the reader that the poets passion, strength and identity flourishes. Once again the mother tongue succeeds and beautifully describes its victory, this victory shows the importance that identity has to the poet. ...read more.