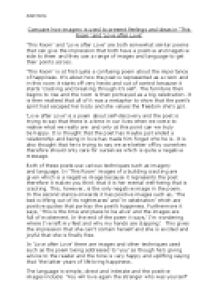 ﻿Adam Kemp Compare how imagery is used to present feelings and ideas in ?This Room? and ?Love after Love? ?This Room? and ?Love after Love? are both somewhat similar poems that can give the impression that both have a positive and negative side to them and they use a range of images and language to get their points across. ?This Room? is at first quite a confusing poem about the importance of happiness. It?s about how the poet is represented as a room and in this room it starts off very hectic and out of control because it starts ?cracking and breaking through it?s self?. The furniture then begins to rise and the room is then portrayed as a big celebration. ...read more.

Both of these poets use various techniques such as imagery and language. In ?This Room? images of a building cracking are given which is a negative image because it represents the poet therefore it makes you think that it is her mental well-being that is cracking. This, however, is the only negative image in the poem. In the second stanza onwards it has positive images such as, ?The bed is lifting out of its nightmares? and ?in celebration? which are positive quotes that portray the poet?s happiness. Furthermore it says, ?This is the time and place to be alive? and the images are full of excitement. ...read more.

This gives it a negative aspect. The author of ?This Room?, Imtiaz Dharker was born in Pakistan and she believes that identity comes from beliefs and culture. ?This Room? might reflect this because it could be about what she believes in as the poem does mention how she values her freedom. The poet of ?Love after Love?, Derek Walcott was born in 1930 in St. Lucia where he grew up influenced by different cultural traditions (African and European). Many of his poems reflect this and it is possible that at some time in his life he experienced ending a relationship and realising that he was happier afterwards. ...read more.