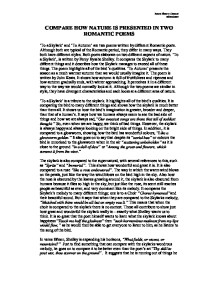 Compare how nature is presented in two Romantic Poems

COMPARE HOW NATURE IS PRESENTED IN TWO ROMANTIC POEMS 'To a Skylark' and 'To Autumn' are two poems written by different Romantic poets. Although both are typical of the Romantic period, they differ in many ways. They both have different styles. Both poets elaborate on two different aspects of nature. 'To a Skylark', is written by Percy Bysshe Shelley. It compares the Skylark to many different things and it describes how the Skylark manages to exceed all of these things. The poem highlights all of the bird's qualities. 'To Autumn' presents the season as a much warmer autumn than we would usually imagine it. The poem is written by John Keats. It shows how autumn is full of fruitfulness and ripeness and how autumn gradually ends, with winter approaching. It perceives it in a different way to the way we would normally look at it. Although the two poems are similar in style, they have divergent characteristics and each looks at a different area of nature. 'To a Skylark' is a tribute to the skylark. It highlights all of the bird's qualities. It is comparing the bird to many different things and shows how the skylark is much better than them all. It shows us how the bird's imagination is greater, broader and deeper, than that of a human's. It says how we humans always seem to see the bad side of things and how we are always sad, "Our sweetest songs are those that tell of saddest thought." ...read more.

"Season of mists and mellow fruitfulness." This contrasts the cold barren aspects of autumn with the comforting mellow fruitfulness. It describes, indirectly, how autumn gradually slows down "thou watchest the last oozings" and then again "Or on a half-reaped furrow sound asleep" before it comes to an end "the soft dying day". It represents autumn as if it were gentle and slow, using references to "sound asleep," "patient look," "soft dying day" and "sinking". 'To a Skylark" has a higher tempo, which is maintained at a consistent level throughout the poem. 'To Autumn' starts at a steady pace, then gradually slows down in order to give the impression of autumn coming to an end. In Verse three, Spring is referred to which is a long way off "Where are the songs of spring?" Spring is beautiful and the start of new life, with its new beginnings, but it comes after the death of winter. Autumn represents the maturity of life - old age, but this can be as beautiful as Spring, as Keats appeals to the reader "think not of them, thy hast thy music too." It also suggests that autumn is not inferior to spring in its sounds as well, for example "full grown lambs bleat aloud" and "hedge crickets sing". The imagery in the final verse draws the reader to recognise that things normally associated with Spring, such as lambs and swallows are also present in the Autumn, symbolising the image of the natural cycle. ...read more.

I like the way that it compares it to so many different things and it gives me a good image of the bird. I can tell this by the way in which Shelley has to broaden his horizons just to find something that can match the skylark. "What fields, or waves, or mountains?" And also, the way Shelley wants to learn from the bird, "Teach me half the gladness that thy brain must know." However, I do also like in "To Autumn" the way in which Keats leaves the reader with a warm sense about autumn through his descriptive language, which makes it come more alive "Close bosom-friend of the maturing sun" Both poems are clearly about nature. Both represent their natural subjects with respect and enthusiasm. They both are beautiful poems, which convey to the reader the poets' deep connection with their subject. However, the mood, style, structure and tempo of each is different. This is because each suits the poets' objective in portraying their subjects as they wish to do so. They are both poems which inspire the reader and impress on them something of the mood of the poet. The reader of 'To the Skylark' would have an impression of the bird, but no detail of what it was actually like. The reader of 'To Autumn' would have no doubt about the precise characteristics of autumn. For the reader, this is like comparing an impressionist painting ('To the Skylark') with a landscape painting ('To Autumn'). Both can be enjoyed for what they are, even though their approach and presentation is different. ?? ?? ?? ?? James Sismey-Durrant 09/05/2007 ...read more.