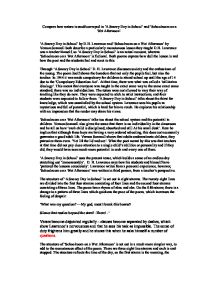 Compare how nature is used/conveyed in 'A Snowy Day in School' and 'Schoolroom on a Wet Afternoon'.

The first talks about how well behaved the child is, whereas the last line is suggesting to us what horrid murderer or person the children may grow up into. Half rhyme is used very close together, each word with a 'tion' sound, which makes these particular lines stand out to the reader: 'Their books, or make pretence of concentration, Each bowed head seems bent in supplication Or resignation to the fate that waits' The language used in 'A Snowy Day in School' often refers to nature. The image we have of snow is a pure, white, soft matter that falls slowly and calmly from the sky, which drapes beautifully over the land. Snow is thought of as softening, so when we read 'A Snowy Day in School' we read it calmly and monotonously even. D. H. Lawrence expresses his boredom and great worry and confusion by telling the reader how snow 'muffles' his mind, 'as snow muffles the sounds that pass down the soiled street'. The snow seems to have disorientated his class and even more so himself as he continues to panic. Snow blankets whatever there is beneath it, so streets are covered completely in white, it hides the inadequacies. When D. H. Lawrence says 'the soiled street', perhaps he is referring to himself. He is not sure what to say to his class, and the snow is distracting his pupils, therefore covering up his own inadequacies. ...read more.

They are simply doing what they have to and not excelling themselves, as they should be. 'Schoolroom on a Wet Afternoon' uses monotonous words to make the poem seem more relaxed or even morbid. Words such as 'sleep', 'bereaved' and 'lachrymose' add to this effect as they give the impression the poet is tired. Pathetic fallacy is used when Scannell says that 'rain falls as though the sky has been bereaved'. Here he is talking about the children's futures as they are yet to be depressing and dull in his opinion. Scannell talks about the children's 'resignation to the fate that waits'. This tells the reader how the children would at last give up fighting the urge not to learn, and finally take in a lesson. Scannell also talks about how possessions reflect real attitudes. He uses a metaphor here, as what he means by the things students hide under their desks, is that the children are really hiding the inner workings of their individual mind. Scannell uses negative and depressing words such as 'vicious' and 'kill' to create mood of the poem. 'A Snowy Day in School' and 'Schoolroom on a Wet Afternoon' are two poems which both base their content on a particular school day. However, the subjects they discuss are very different as 'A Snowy Day in School' talks about society whilst 'Schoolroom on a Wet Afternoon' is about the potential of children. Both poems use nature in order to express the poet's feelings, but in very different ways. ...read more.