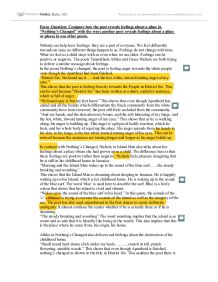 Essay Question: Compare how the past reveals feelings about a place in "Nothing's Changed" with the ways another poet reveals feelings about a place or places in one other poem. Nobody can help have feelings- they are a part of everyone. We feel differently towards an issue as different things happen to us. Feelings do not change with time. What we feel as a child stays with us even when we are older. Feelings can be positive or negative. The poets Tatamkhula Afrika and Grace Nichols are both trying to deliver a similar message about feelings. In the poem Nothing's changed, the poet is feeling anger towards the white people even though the Apartheid had been finished. "District Six. No board say it.... And the hot, white, inward turning anger of my eyes." This shows that the poet is feeling ferocity towards the People in District Six. This can be said because "District Six" has been written as a short, expletive sentence, which is full of anger. "No board says it: but my feet know" This shows that even though Apartheid has ended and all the boards which differentiate the black community from the white community have been removed, the poet still feels secluded from the community. "And my hands, and the skin about my bones, and the soft labouring of my lungs, and the hot, white, inward turning anger of my eyes." ...read more.

He personifies them. Weeds are unwanted and people try to destroy them and the poet is feeling the same way that he is unwanted and he is just like a weed and therefore he feels sad just like them. However in the poem Island Man, Nichols is feeling a sense of joy, remembering the beauty of the landscape. "Wild birds and fisher putting out to the sea........ he always comes back groggily groggily." The second stanza implies the simplistic pleasure of Island life. It is laid back and this is something about this kind of life that Island Man remembers. The word defiantly personifies the sun. The sun is really bright and almost harsh and the word defiantly almost seems to be daring anyone to try and stop him. It also means that despite his best wishes the sun is going to set. The poet doesn't want this because he wants to lie on his island, to be relaxed, the sun is surfacing anyway telling him that it is all going to end. The poet also uses sibilance to try and recreate the sounds of the sea. Nichols also uses the word emerald to describe his island. Emerald in itself is deep green which we associate with nature, relaxation and with things that are free and pure. ...read more.

The word 'heaves' shows that the Island Man gets up from his bed with great dissatisfaction from being in London. 'Another' indicates to us that it just is another day in London, with nothing exciting, nothing to look forward to but something that he has been doing for quite a long time, as if a daily routine. In conclusion I feel that Nothing' Changed was a better poem than Island Man because Afrika in his poem uses different techniques that have worked better than Nichols. He uses similes, metaphors and onomatopoeia to help the reader to understand the poet's feelings about District Six. The word click used in the first stanza is an onomatopoeia, which helps the reader to visualise the feelings the poet is trying to deliver to us. He uses repetition with the words mean mouth to add to the effects. In the second stanza, Afrika uses enjambment to give the reader a sense of speed that increases as his fury increases. The readers can also sense the sadness through his descriptions of what has changed in the environment. He uses descriptive words throughout the poem to emphasize the feelings that he wants his readers to feel. This can also be seen with the use of first person. This helps to make the poem more vivid and we can sense his feelings because he is referring to himself, which makes us realise that he went through all this. ?? ?? ?? ?? Nidhia Babu 10C ...read more.

A very good essay. Detailed and perceptive analysis of poetic techniques used by both poets.
Accurate and thorough analysis of language using correct poetic terminology.
Most comments are supported by references to poems.
Explores and discusses meaning thoroughly.
Shows knowledge of social and historical context.
A few lapses in expression and needs a conclusion to summarise exploration of both poems.