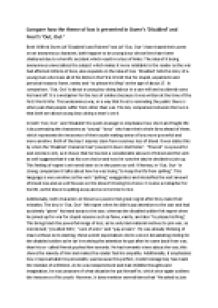 Compare how the theme of loss is presented in Owens Disabled and Frosts Out, Out-

﻿Compare how the theme of loss is presented in Owen?s ?Disabled? and Frost?s ?Out, Out-? Both Wilfred Owen (of ?Disabled?) and Robert Frost (of ?Out, Out-?) have based their poem on an anonymous character; both happen to be young boys whose lives have been shattered due to a horrific accident which result in a loss of limbs. The idea of it being anonymous universalises the subject which makes it more relatable to the reader as the war had affected millions of lives, also expands on the idea of loss. ?Disabled? tells the story of a young man who loses all of his limbs in the First World War for stupid, unpatriotic and personal reasons: fame, vanity and ?to please his Meg? at the age of about 17. In comparison, ?Out, Out? is about a young boy doing labour in a saw mill and accidently saws his hand off. It is a metaphor for the loss of soldiers because it was written at the time of the First World War. This undermines war; in a way that Frost is reminding the public there is other pain that people suffer from other than war. The key comparison between the two is that both are about young boys doing a man?s work. ...read more.

He had romantic views about the war; this shows the naivety of him and makes the reader feel his empathy. Additionally, it emphasises how irreproachable his personality was because this perfect, model teenage boy has made the mistake of a lifetime. As he was inexperienced and had childlike thoughts and imagination, he was unaware of what situation he put himself in, which once again outlines the innocence of his youth. However, it does mention several times that ?He asked to join. He didn?t have to beg? which refers back to the idea that he is only to blame, as whatever position he is now standing in, was completely his decision. He had also been taken away by the persuasive black propaganda. This makes his loss feel more pointless and very regretful. So this defies his argument about blaming Meg. Whilst comparing these characters together they, as well, blame their faults onto somebody else. We, as a reader, understand this, because when he mentions the reasons why he joined up for war, he mentions how it was ?to please his Meg?, and this sounds sarcastic to us that he threw his life away at such a young age for a girl who doesn?t even care enough to visit him anymore, instead leaving him lonely in a ?wheeled chair, waiting for dark?. ...read more.

Another example of the use of this effect would be in the poem ?Disabled? where Wilfred Owen describes how the disabled soldier listens outside from his hospital bed how the ?Voices of boys rang saddening like a hymn? and also their ?Voices of play and pleasure?. The use of this anaphora gives the effect of an echo and how the children?s happiness haunts him. Also the plosive used on ?play and pleasure? gives it a harsh tone to possibly show that he is jealous of the freedom of the children as he barely had any youth himself so he envies those who have. What sounds to the reader (which is mirrored earlier on) is a beautiful setting by which Owen has as well as Frost added a negative perspective to it. However, in this poem it is to show the emotions of the angry and bitter disabled soldier, unlike in ?Out, Out-? where it is to show the building tension of a beautiful setting coming into contrast with a scene of horrific events. These characters are very remorseful about why they had made their stupid mistakes in the first place. This once again makes the loss wasted and valueless. ...read more.