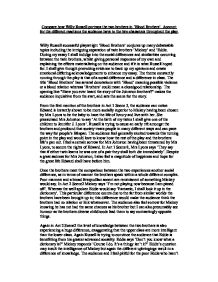 Compare how Willy Russell portrays the two brothers in Blood Brothers. Account for the different reactions the audience have to the two characters throughout the play.

Compare how Willy Russell portrays the two brothers in 'Blood Brothers'. Account for the different reactions the audience have to the two characters throughout the play. Willy Russell successful playwright 'Blood Brothers' conjures up many debateable topics including the intriguing separation of twin brothers 'Mickey' and 'Eddie. During my essay I shall indulge into the social differences and similarities occurring between the twin brothers, whilst giving personal responses of my own and explaining the effects materializing on the audience and if it is what Russell hoped for. I shall give thought provoking evidence to back up my opinions and create emotional differing acknowledgements to enhance my essay. The theme constantly running through the play is that of a social difference and a difference in class. The title 'Blood Brothers' has several denotations with 'Blood' meaning possible violence or a blood relation whereas 'Brothers' could mean a close/good relationship. The opening line "Have you ever heard the story of the Johnston brothers?" makes the audience inquisitive from the start, and sets the scene for the story. From the first mention of the brothers in Act 1 Scene 5, the audience can notice Edward is instantly shown to be more socially superior to Mickey having been chosen by Mrs Lyons to be the baby to have the life of luxury and live with her. ...read more.

A more angry approach from a policewoman is aimed at the lower classed Mickey, as she says 'He was about o commit a serious crime, love'. The reputation and respect of Eddie and his family earns a more laid back approach from the policewoman, saying 'It was more of a prank really, Mrs Lyons'. Russell explores how class can make a big difference to people's lives and happiness. The reputation of Eddie will cause no dispute whatsoever, creating no anguish or woe in the family. Whereas Mickey will receive much of a telling off, to the sorrowful audience. The audience find it hard to accept society treats people in different ways, especially in Mickey's case. Again the higher class of Eddie shows his more polite side after asking Mrs Johnston how she is. In Act 2 Scene 8 Eddie says 'Hello, Mrs Johnston, how are you?' The mother answers 'I don't usually have kids enquiring about my health.' The politeness of Eddie is apparent due to his level of class, and this again is a tactic of Russell's to elaborate the superior sociality and mannerism of the upper class. The audience and I feel sorry for Mrs Johnston, who practically deserves better for the hard work she has done and the fact her own child is stood right upon her without him even knowing is clearly tough going for her. ...read more.

Mickey says 'you're a boss...were not supposed to talk' and later he says 'This job stinks...but it's my job'. The audience know Mickey works hard and is stuck in a dead end job and despite being given the job from his brother the audience hugely sympathise him. Russell also makes it ironic that upper class life gives you more respect from society and life, showing money does give you power. I really enjoyed reading the play, after having studied it in great detail. Although a sad ending it is a brilliant play throughout and never a dull moment. There are lots of creative moments in the play which always keep you interested. I especially like the way Russell compares and contrasts the two classes between Eddie and Mickey during childhood, adolescence and adulthood. Humour is also brought into the play as you can see that Mickey just doesn't have a clue and isn't ever going to get anywhere and you also see that Eddie is so different and has the brains but starts to throw it away due to his love for Lisa and Mickey's bad influence. For me Russell did a great job despite vastly exaggerating the difference of upper and lower class society. ...read more.