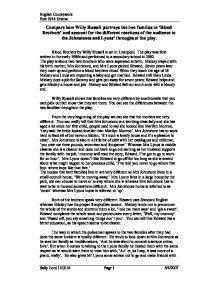 Compare how Willy Russell portrays the two families in 'Blood Brothers' and account for the different reactions of the audience to the Johnstones and Lyons' throughout the play.

Compare how Willy Russell portrays the two families in 'Blood Brothers' and account for the different reactions of the audience to the Johnstones and Lyons' throughout the play. Blood Brothers by Willy Russell is set in Liverpool. The play was first written in the early 1980s and performed to a secondary school in 1982. The play is about two twin brothers who were separated at birth. Mickey stayed with his birth mother, Mrs Johnstone, and Mrs Lyons picked Edward. Seven years later they meet up and perform a blood brothers ritual. When they reach the age of 18 Mickey and Linda are expecting a baby and get married. Edward still likes Linda. Mickey does a job for Sammy and gets put away for seven years; Edward helps and gets Mickey a house and job. Mickey and Edward fall out and it ends with a bloody end. Willy Russell shows that families are very different by small details that you cant pick out but know that they are there. You can see the differences between the two families throughout the play. From the very beginning of the play we can see that the mothers are very different. ...read more.

The way in which the policeman speaks to the two families after they had done the same incident is totally different. He tends to look down at Mrs Johnstone as he sees her family as troublemakers, 'And he was about to commit a serious crime, love'. But when it comes to talking to the Lyons family he treated them with the same respect as he would want them to treat him with, 'An' er, as I say, it was more of a prank, really'. He also gives Mr Lyons some advice not to go and make friends with Mickey's type, 'I'm not sure I'd let him mix with the likes of them in the future.' He was having a go at Mrs Johnstone for letting Mickey play out. He was warning her that if anything happened she would be straight down to the courts again 'there'll be no more bloody warnings . . ./ it'll be the courts for you, or worse.' He also threatened her as well. This tells us that the policeman thinks that Mrs. Johnstone and her family are beneath him. Mrs Johnstone has a big family; she has 8 children and her husband walked out on her when she was pregnant with Mickey. ...read more.

I don't think it has a lot to do with superstition but it is a coincidence that the both die after Mrs Lyon told Mrs Johnstone it would happen. I think that Willy Russell wanted to make us think about how we act today, and also think about how we are with each other. If we treat each other without that much respect then of course something bad will come out of it, but it you try and make an effect to make it work then it may be a better place to be. I think that the way Willy Russell portrays the families is really well done, he uses the right language and you can really tell that the two families are very different especially in the way they speak and act. Mrs Lyons doesn't seem to want to leave Edward for long as she was scared that something bad might happen as it did. The way the audience reacts to the play is really good. It gets you thinking how you act and how people can be like that. So overall Willy Russell takes into count how the two families look and how the audience responds to the play. English Coursework Post 1914 Drama Sally Lord 11GLM Page 1 5/4/2007 ...read more.

Response to Question
The candidate begins his/her answer with a brief summary of the play. I feel it's important to remind all students that this is in no way necessary. It will not gain you any more marks, so it ...

Response to Question
The candidate begins his/her answer with a brief summary of the play. I feel it's important to remind all students that this is in no way necessary. It will not gain you any more marks, so it is not worth spending time writing it, when the time could be put to use more constructively. Aside from that, the candidate's response is average. Lots of comparisons are made between the two central families, and an extensive description of the portrayal of the Lyons and the Johnstones is given, but there is little to no recognition of the second part of the question - account for the different reactions of the audience to the Johnstones and Lyons - which is a flaw of this essay.

Level of Analysis
The candidate fails to explain the significance of or analyse many of the quotes s/he uses, and sometimes it appears that quotes are irrelevant, although a link could be made between the idea and the quotation used as evidence, the candidate's failure to identify or clarify this link to readers makes for a less successful essay. Too often the candidate is merely describing the play, instead of commenting on it, and if they worked on this, then the essay would immediately go up by one or two grade boundaries.

Quality of Writing
Spelling and punctuation are both generally good in this essay, and the candidate gives a clear introduction and conclusion. The candidate's style of writing feels too casual to me, but it is unlikely this would lose them marks. However, writing in a controlled and mature style gives a good impression to examiners and may make them look more favourably on your essay, particularly if it is on the borderline of a grade boundary. The use of terms such as "suck up" is not appropriate for an academic essay, even at GCSE level.The candidate also does not integrate quotes into their essay well, often placing them immediately after having made their point.