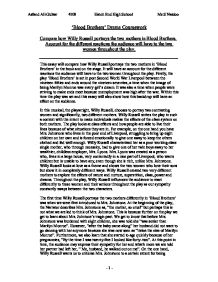 Compare how w***y Russell portrays the two mothers in Blood Brothers. Account for the different reactions the audience will have to the two women throughout the play.

Another way w***y Russell portrays the two mothers to be different in the scene is the different language they use which suggests something about their education. On the one hand there is Mrs. Lyons who uses mature and 'high-level' English. On the stage we can hear the accents which remind us of the conflict between the classes. Mrs. Lyons is well-spoken, traditional of the middle and higher classes- suggesting a good education and elocution classes. Yet on the other hand, there is Mrs. Johnstone who uses a more clumsy style and misses out letters as shown in the play, " Effin' and blindin". She uses a Liverpudlian accent on stage, suggesting the lack of a 'proper' education and implying a connotation of 'commonness'. This could also suggest that in a way Mrs. Johnstone has a narcissistic view of the world. Hence this is another way w***y Russell is portraying the two different mothers in 'Blood Brothers' which may have an effect towards the audience. Furthermore, w***y Russell also portrays the two mothers differently when Mrs. Lyons decides to fire Mrs. Johnstone. In this scene the audience will have deep sympathy towards Mrs. Johnstone. This scene is after Mrs. Johnstone gives birth to the twins. We see Mrs. Johnstone very caring towards her baby whereas Mrs. Lyons at first treats her baby like a 'product' or 'bargain'. The audiences will now feel concerned towards Mrs. Johnstone and may take Mrs. Lyons to be insensitive. Nonetheless in this scene, Mrs. Johnstone continues to work for Mrs. Lyons, however eventually Mrs. Lyons feels she no longer wants Mrs. Johnstone around who decided she will take the baby with her despite having sworn on the bible. ...read more.

This means that Mrs. Johnstone has a better awareness of teenagers which earns her instant credibility with her two sons and the audience. We see her as more down-to-earth than Mrs. Lyons and the more approachable mother. This scene is also an indication that happiness during upbringing is not assured by social status or wealth. It also shows that Mrs. Johnstone and Mrs. Lyons have a completely different view of life. In conclusion, one the one hand, sometimes w***y Russell portrays Mrs. Johnstone to be the 'real' mother and induces the audience to be attracted to her. Russell than portrays Mrs. Lyons to be the 'false' mother and sways the audience to find her unsympathetic and snobbish. He portrays her as a cold woman who does not show much emotion. We see her as over-protective of Eddie as she fears his bond with the Johnstone family. Yet on the other hand, w***y Russell tends to make the audience to believe that Mrs. Lyons and Mrs. Johnstone are equally sympathetic. He portrays both mothers to be loving and caring mothers who make the best of things. In general, w***y Russell does portray Mrs. Johnstone to be the 'real' mother seeing that she understood the tender relationship between Mickey and Edward. w***y Russell portrayed Mrs. Lyons to be a very selfish woman because of her previous actions like sending Edward to boarding school and showing Mickey that Edward and Linda have been unfaithful. The audience will also feel very understanding and sympathetic towards Mrs. Johnstone throughout the play whereas they may have felt hatred for Mrs. Lyons. ?? ?? ?? ?? Asfand Ali Gulzar 4108 Hatch End High School Ms S Naidoo - 1 - ...read more.