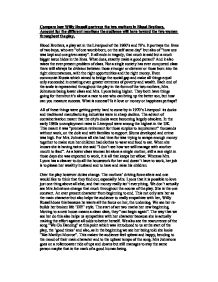 Compare how Willy Russell portrays the two mothers in Blood Brothers. Account for the different reactions the audience will have toward the two women throughout the play.

Compare how Willy Russell portrays the two mothers in Blood Brothers. Account for the different reactions the audience will have toward the two women throughout the play. Blood Brothers, a play set in the Liverpool of the 1960's and 70's. It portrays the lives of two boys, who are "of one womb born, on the self same day" but also of "how one was kept and one given away". It all ends in tragedy, that much is said but a much bigger issue hides in the lines. What does, exactly make a good person? And it also raises the ever present problem of class. Not a single society has ever conquered class there will always be division between those stronger or cleverer or those born into the right circumstances, with the right opportunities and the right money. Even communist Russia which aimed to bridge the social gap and make all things equal only succeeded in creating even greater extremes of poverty and wealth. Each end of the scale is represented throughout the play in the form of the two mothers, Mrs. Johnstone being lower class and Mrs. Lyons being higher. They both have things going for them but it's almost a race to see who can bring up the better son, but how can you measure success. What is success? Is it love or money or happiness perhaps? All of these things were getting pretty hard to come by in 1970's Liverpool its docks and traditional manufacturing industries were in sharp decline. ...read more.

you may not have thought possible from a woman who seems to think of her baby as a possesion "Edward is my son, mine!". But did Mrs Lyons bring about her own selfproclaimed ruin? Her love of her son or maybe just fear of losing him made her paranoid and her paranoia about her sons discovery of the truth made her a bad mother perhaps. We also see her becoming perhaps becoming less rational believing in the superstition she once scorned Mrs. Johnstone for which suggests her lacking the common sense she used to have, putting Mrs Johnstone's little superstitions down to a lack of education or a sign of the society in which she was brought up. But a chracter has to be presented a certain way for it to change. We are introduced to the two mothers very early in the play, Mrs Johnstone first. Instantly the audience like Mrs Johnstone and dislike Mrs Lyons. We see Mrs Johnstone falling from glory. This fall is illustrated by the use of Marilyn Monroe as a kind of benchmark, one minute she is "sexier than Marilyn Monroe" next she's "twice the size of Marilyn Monroe". The audience see she has her heart in the right place and has been ditched by her good for nothing husband, They sympathize with her struggling to pay the milkman with many hungry mouthes to feed. However on the other end of the scale Mrs Lyons can't have any children, it's all she lacks in her apparently perfect world and perhaps that's why she gains ...read more.

Where as Mrs Lyons seems to be fairly well educated, we see her argue her way out of tight spots like when her husband gets suspicious when she snaps a Mrs Johnstone for wanting to hold the baby, he says "don't be hard on the woman" but Mrs Lyons comes back saying that she dosen't want the baby to catch anything as if to imply that her husband cares for their child less than her and then guilt trips him further by looking as if "she is about to cry" in the stage directions. This is meditated, she knows what she is doing and it shows clear inteligence. Mrs Johnstone could probably make more use out of Mrs Lyons education in the work place than she ever would being a house wife and this clear advantage and the way it is put across to look so unfair allow Mrs Johnstone to be viewed as the clear underdog and everyone loves an underdog. I think that Mrs Lyons is made out to be the villain of this tale but really its just the writer manipulating the audiences emotions. It could probably easily be turned around and Mrs Lyons be made the hero. Willy Russell presents the two mothers as total opposties in class but they do share one thing their mutual love of Eddie. He portrays Mrs Johnstone in a very favourable light and Mrs Lyons in a negative one. This has a huge effect on the way the audience relate to and feel about the two different charaters. Positive or negative it is all engineered by the writer. ...read more.