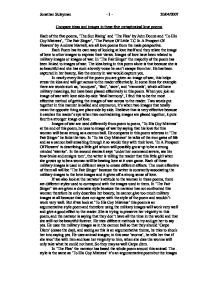 Compare ideas and images in these five metaphysical love poems.

Compare ideas and images in these five metaphysical love poems. Each of the five poems, 'The Sun Rising' and 'The Flea' by John Donne and 'To His Coy Mistress', 'The Fair Singer', 'The Picture Of Little T.C In A Prospect Of Flowers' by Andrew Marvell, are all love poems from the male perspective. Each Poem has its own way of looking at love itself and they relate the image of love to other images to express their views. Images of love have been related to military images or images of war. In 'The Fair Singer' the majority of the poem has been linked to images of war. The idea being in this poem alone is that because she is so beautiful and she has such a lovely voice he can't escape from her. He has been captured in her beauty, like the enemy in war would capture you. In nearly every line of the poem you are given an image of war, this helps stress the idea and will get across to the reader effectively. In some lines for example there are words such as, 'conquest', 'fled', 'save', and 'trammels', which all have military meanings, but have been placed effectively in this poem. ...read more.

But if we look at 'To His Coy Mistress' this poem is an argumentative style poem and therefore using the military images will work very well and give a good effect to the reader. She is trying to preserve her virginity in this poem, and the narrator is saying that they don't have all the time in the world and that she will not be beautiful forever. He tries different methods to try and get her to say yes. He uses the military images as in the cannon ball so that they should 'Carpe Diem' (cease the day), and seeing as this is an argumentative theme, he tries to shock her into saying yes. He uses animal images; in this case 'worms', he tells her that if she won't be with him and lose her virginity to him, when she dies the worms will only take what he could not have. So they may as well Carpe diem. In 'The Flea' the narrator has based the whole poem around this animal. The style is the same as 'To His Coy Mistress' it's an argumentative poem but the images given in here are both extreme and unexpected. The woman in this poem seems to want to preserve her virginity as well. ...read more.

'The Rising Sun' has based the sun around the couple that have already slept together. This poem is split into three sections. The first he tells the sun to go away and wake others up such as 'Late school-boys'. The second he is now asking the sun why he thinks that he is so important, just being able to rise every morning and wake up everyone, because all the man has to do is close his eyes and the sun is gone. But as we get to the third stanza, the narrator completely reverses himself to the first one in saying because the woman and him are so much in love with each other, 'She is all States, and all Princess, I; Nothing else is' that they are the whole world itself in this one bed so the sun doesn't have to move at all. I find that if you concentrate on I theme like 'The Flea' with is being based around the flea, and 'The Rising Sun' being based around the sun. You will get a far more dramatic effect than poems such as 'To His Coy Mistress' and 'In A Prospect Of Flowers'. You'll get far more drama and effect concentrating on a moment than mixing everything all up. Jonathan Suleyman - 1 - 20/04/2007 ...read more.