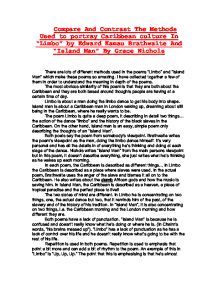 Compare And Contrast The Methods Used to portray Caribbean culture In "Limbo" by Edward Kamau Brathwaite And "Island Man" By Grace Nichols There are lots of different methods used in the poems "Limbo" and "Island Man" which make these poems so amazing. I have collected together a few of them in order to understand the meaning in depth of the poems. The most obvious similarity of this poem is that they are both about the Caribbean and they are both based around thoughts people are having at a certain time of day. Limbo is about a man doing the limbo dance to get his body into shape. Island man is about a Caribbean man in London waking up, dreaming about still being in the Caribbean, where he really wants to be. The poem Limbo is quite a deep poem, it describing in detail two things... ...read more.

In Island Man, the Caribbean is described as a heaven, a place of tropical paradise and the perfect place to live!! The two states of mind are different. In Limbo he is concentrating on two things, one, the actual dance but two, that it reminds him of the past, of the slavery and of the history of his tradition. In "Island Man", it is also concentrating on two things, i.e. the Caribbean morning and the London morning and how different they are. Both poems have a lack of punctuation. "Island Man" is because he is confused and doesn't really know what he's doing or where he is. (In Chaim's words, "his brains messed up"). "Limbo" has a lack of punctuation as he has a lack of control over his life and he doesn't really know what's going to be with the rest of his life. ...read more.

Both poets use rhyme in their poems. They use rhyme to add a tune into the poem and to make it flow better. An example of this is in Limbo when it says "Limbo Like Me... Limbo like me" or when it says in Island Man, "Breaking and wombing". Only in "Island Man" are links used. It has a lot of links in it comparing a dreary, rainy London morning to a bright, sunny Caribbean morning. A lot of words and sentences are used to combine them both together. For example, when it says in the beginning of the poems it says "SUN" which can obviously be compared with "North CIRCULAR" seeing as the sun is circular or when it says "Sound" which the actual word sounds like "sand" which is written in the second half. I think these poems are quite similar with the methods they use to portray Caribbean culture. > Wasn't here on first day of giving notes ...read more.