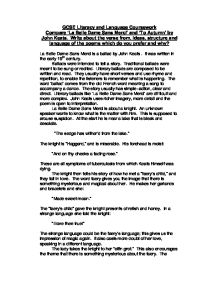 Compare 'La Belle Dame Sans Merci' and 'To Autumn' by John Keats. Write about the verse from, ideas, structure and language of the poems which do you prefer and why?

GCSE Literacy and Language Coursework Compare 'La Belle Dame Sans Merci' and 'To Autumn' by John Keats. Write about the verse from, ideas, structure and language of the poems which do you prefer and why? La Belle Dame Sans Merci is a ballad by John Keats. It was written in the early 19th century. Ballads were intended to tell a story. Traditional ballads were meant to be sung or recited. Literary ballads are composed to be written and read. They usually have short verses and use rhyme and repetition, to enable the listeners to remember what is happening. The word 'ballad' comes from the old French word meaning a song to accompany a dance. The story usually has simple-action, clear and direct. Literary ballads like 'La Belle Dame Sans Merci' are difficult and more complex. John Keats uses richer imagery, more detail and the poem is open to interpretation. La Belle Dame Sans Merci is about a knight. An unknown speaker wants to know what is the matter with him. ...read more.

Keats has done this to express that someone is ill in the poem, the knight. The word "pale" is also repeated in the tenth stanza. This maybe because the knight is close to death. In the poem all the stanzas are the same length, four lines. In all the stanzas the end of the second and fourth lines rhyme as the rhyme scheme is ABCB. John Keats appeals to the reader's sense when he writes: "She found me roots of relish sweet, And honey wild, and manna dew." John Keats uses the contrasts to emphasize the good things on life being taken away from the knight. Imagery such as: "I saw their staved lips in the gloam." Is used to give the image of death to the reader. La Belle Dame Sans Merci is a dialogue. This makes the poem more effective. At the start it gives you an idea that the knight is very ill. The other speaker repeating the same line made striking as it kept the reader reading to find out what is wrong with the knight. ...read more.

In conclusion 'La Belle Dame Sans Merci' has all the characteristics of a ballad. It tells a story with a tragic theme and has short verses with a regular rhyme scheme. 'To Autumn' has no narrative but concentrates on rich imagery to describe the season. It has three long verses with a complex rhyme scheme. It is an ode. The ballad uses repetition-contrasting atmosphere and contains elements of the supernatural. The ode has none of these. The ballad is written as a dialogue whereas the ode has only the voice of the poet. Both poems contain rich imagery and sensory appeal but 'To Autumn' does this to a greater degree. Death plays a part in both poems but there is only a hint of death in the title. The poem I prefer is 'La Belle Dame Sans Merci.' 'La Belle Dame Sans Merci' tells a story; this made the poem more interesting for me as it kept me reading to find out what happened to the knight. 'To Autumn' describes the autumn, for me the poem is not appealing and it did not keep me interested. By Lee Baldwin ...read more.