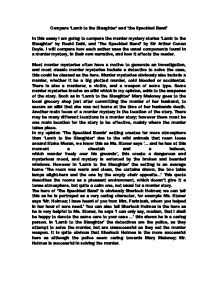 Compare 'Lamb to the Slaughter' and 'the Speckled Band'

Compare 'Lamb to the Slaughter' and 'the Speckled Band' In this essay I am going to compare the murder mystery stories 'Lamb to the Slaughter' by Roald Dahl, and 'The Speckled Band' by Sir Arthur Conan Doyle. I will compare how each author uses the usual components found in a murder mystery, in their own narrative, and how it affects the reader. Most murder mysteries often have a motive to generate an investigation, and most classic murder mysteries include a detective to solve the case, this could be classed as the hero. Murder mysteries obviously also include a murder, whether it be a big plotted murder, cold blooded or accidental. There is also a murderer, a victim, and a weapon of some type. Some murder mysteries involve an alibi which in my opinion, adds to the suspense of the story. Such as in 'Lamb to the Slaughter' Mary Maloney goes to the local grocery shop just after committing the murder of her husband, to secure an alibi that she was not home at the time of her husbands death. Another main focus of a murder mystery is the location of the story. There may be many different locations in a murder story; however there must be one main location for the story to be effective, mainly where the murder takes place. ...read more.

Roylott is a bad person as Helen stoner tells Mr. Holmes 'He became the terror of the village.' this shows that everybody was scared of him. The villain in 'Lamb to the Slaughter' is indistinct as Mary Maloney did kill her husband, but it wasn't intentional as such, but you could say that because Patrick had betrayed Mary's trust, by tell her he was leaving, whilst she was pregnant, that he was partly a villain as well. However the fact that at the end of the story it says 'And in the other room, Mary Maloney began to giggle' shows that she was happy she had got away with the crime. This therefore makes her the villain as it shows that she was not sorry for murdering her husband and glad she had got away with it. Mary Maloney is not such an obvious villain as Dr. Roylott, as she seemed loving towards her husband at the start of the story, but overall she is still a bad character. The victim of 'The Speckled Band' is plainly Julia because she was killed by her step father Dr. Royott and Helen as she was being abused by him. ...read more.

Women are treated better with more respect today, as in 'The Speckled Band' Helen is treated badly by her father. I think a Victorian audience would have been much more shocked at the fact that Mrs. Maloney could get away with a crime such as that. The structures of the two stories are very different, with The Speckled Band story unfolding in chronological order, finding out the murderer right at the end, but in the Lamb to the Slaughter, the murderer is known at the beginning of the story. The two stories are seen from two different points of view, first-person narrator in The Speckled Band as Dr Watson character within the story and therefore limited in understanding and the all-knowing third-person narrator in Lamb to the Slaughter as the narrator stands outside the story itself and guide the through reader's understanding of characters and the significance of their story. Most murder mysteries have the typical victims, murderers, and detectives. But overall I prefer 'The Speckled Band' written by Sir Arthur Conan Doyle as I prefer its more classic style and I think the way the murder was carried out was much more interesting than being him with a leg of lamb, although both ways in with the murders were conducted don't seem that plausible in my opinion. ...read more.