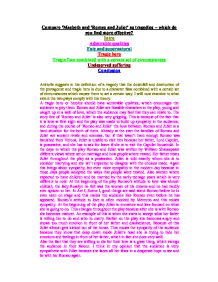 Compare 'Macbeth and 'Romeo and Juliet' as tragedies - which do you find more effective?

Compare 'Macbeth and 'Romeo and Juliet' as tragedies - which do you find more effective? Intro Admirable qualities Fate and supernatural Tragic hero Tragic flaw combined with a certain set of circumstances Undeserved suffering Conclusion Aristotle suggests in his definition of a tragedy that the downfall and destruction of the protagonist and tragic hero is due to a character flaw combined with a certain set of circumstances which causes them to act a certain way. I will now examine to what extent the two plays comply with his theory. A tragic hero or heroine should have admirable qualities, which encourages the audience to pity them. Romeo and Juliet are likeable characters in the play, young and caught up in a web of love, which the audience may feel that they can relate to. The story line of 'Romeo and Juliet' is also very gripping. This is because of the fact that it is love at first sight and the play was made to build up sympathy in the audience, and during the course of 'Romeo and Juliet' the love between Romeo and Juliet is a hard situation for the both of them. Already at the start the families of Romeo and Juliet are ancient rivals and enemies, but if that wasn't hard enough Romeo was banished from Verona. Juliet is unable to visit him because her father, Lord Capulet, is possessive, and she has to ask for leave if she is to exit the Capulet household. In the days in which the play Romeo and Juliet was written by William Shakespeare different views where set on marriage and how people where treated. Her father treats Juliet throughout the play as a possession. Juliet is told exactly whom she is to consider marrying and she isn't expected to disagree with the choices made. Again this brings about sympathy, but even more sympathy in the modern day because in those days people accepted the ways that people were treated. ...read more.

We're all sort of like the puppets below the puppeteer. He's asking for that puppeteer to direct his "sail," or his life, in the right direction. Romeo and Juliet throughout the play have dreams or visions of their deaths. Juliet for example in 3.5.55, she says, "Methinks I see thee, now thou art so low, as one dead in the bottom of a tomb." She sees Romeo dead in a tomb, which is where he eventually ends up in the end of the play, beside her. This why she talks about Romeo being s o low in a tomb, he's dead, and she has foreseen it, before it has even happened. How could she have seen the future if it wasn't already decided for her? The answer is, she probably couldn't have. During this part of the play, after Romeo has killed Paris and himself but before Juliet has done the same, the Friar comes rushing in, trying to persuade Juliet out of the tomb before more arrive. He says to Juliet 5.3.159, "A greater power than we can contradict hath thwarted our intents." It can be interpreted that he is talking of fate, telling Juliet that a power beyond their control has spoiled their plans. This power must be fate. Nowadays, a tragic hero is a person who has a talent or skill, is a great character and has usually achieved something momentous. They also may have died tragically, often for mankind. Whichever way you look at him, Macbeth is contemptible, even if you think he was just an instrument of the witches, and unable to escape his fate. However, he often challenges fate, as he believes he leads a 'charmed life'. This is because he was told that 'none of woman born shall harm Macbeth' and that he cannot be vanquished until 'Great Birnam wood to high Dunsinane hill shall come'. Unfortunately for Macbeth though, Birnam wood does seem to move toward Dunsinane. ...read more.

In that case he is still loathsome because of the weakness he exhibits with Lady Macbeth and the unnecessary murders of Lady Macduff and all her household. Macbeth achieved nothing terribly momentous in his life, apart from his success as a soldier. But his latter behaviour ruins any favourable impression you might have formed of him. Macbeth did not die in tragic circumstances; he was killed by the husband and father of people he had murdered without a cause. He was defending his unlawful position as King against the claims of the true heir to the crown, and he died as he lived his life: selfishly and thoughtlessly, without putting right or seeming to regret any of the vile acts he has committed or the self-interested pain he has caused. 'Macbeth' fulfils my expectations of a Shakespearean tragedy as it follows all the factors given by Aristotle. 'Macbeth' leaves a feeling of catharsis in its audience as I felt upset by the events of the story yet was left with a feeling that it was for the better as evil had been defeated (Macbeth) and good had overcome it (Malcolm). Scotland was a happier place after Macbeth had been defeated. Order was restored and Malcolm brought harmony back to Scotland as he was rightfully king because he was the son of Duncan. I personally found 'Macbeth' quite a tragic story as there is a lot if suffering and many people are killed. 'Romeo and Juliet' has elements of tragedy. Young, innocent lovers die, through no fault of their own. The play does not show the common pattern of tragedy, a person of high rank falling to death. Instead it shows the deaths of two protagonists, young and hasty, caught in a web only partly of their own making. But if it were not for the sombre Prologue, Romeo and Juliet would seem very much a comedy until the unexpected, almost accidental death of Mercutio. ...read more.