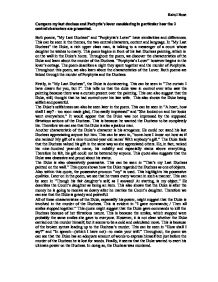 Compare my last duchess and Porhyria's lover considering in particular how the 2 central characters are presented.

Compare my last duchess and Porhyria's lover considering in particular how the 2 central characters are presented. Both poems, "My Last Duchess" and "Porphyria's Lover" have similarities and differences. This can be seen in the themes, the two central characters, content and language. In "My Last Duchess" the Duke, a rich upper class man, is talking to a messenger of a count whose daughter he wishes to marry. This poem begins in front of his last Duchess painting, which is on the wall in the Duke's home. Throughout the poem, we discover the characteristics of the Duke and learn about the murder of the Duchess. "Porphyria's Lover" however begins in the lover's cottage. The poem describes a night they spent together and the murder of Porphyria. Throughout this poem, we also learn about the characteristics of the Lover. Both poems are linked through the murder of Porphyria and the Duchess. Firstly, in "My Last Duchess", the Duke is domineering. This can be seen in "The curtain I have drawn for you, but I". This tells us that the duke was in control over who saw the painting because there was a curtain present over the painting. This can also suggest that the Duke, still, thought that he had control over his late wife. This also shows the Duke being selfish and powerful. ...read more.

However, it is not clear whether the Duke carried out the murder himself, but it seems to be a cold and calculated move. This is because of the broken syntax leading up to the Duchess's murder. This can be seen in "How shall I say?" and "In speech-(which I have not)-to make your will." Throughout, the poem we can see that the Duke has an adequate amount of words to express himself but just before the murder of the Duchess he is lost for words. Finally, it seems that the Duke wanted to exert his ultimate power on the Duchess. In doing so, the Duchess was murdered. The character in "Porphyria's Lover" is revealed in a similar way to the Duke's character in "My Last Duchess." The poem "Porphyria's Lover" builds up to the murder of Porphyria in a similar fashion to the murder of the Duchess. Firstly, the lover, like the Duke, wants to control and own his love. This can be seen in "Give herself to me forever." This suggests that he wants Porphyria above everything else and he would go to any extent to fulfil his desires. This also suggests that he is self-centred. We can see that the Lover has similar characteristics to that of the Duke in being obsessive. However, the Duke is obsessive about his possessions and gaining status. ...read more.

By contrast, the murder of the Duchess was cold and calculated. In fact after the murder, the Lover accomplishes his task of making Porphyria his own and carries on living as usual. This can be seen in "I propped her head up as before,/ Only, this time my shoulder bore/ Her head, which droops upon it still:" and "And thus we sit together now,/ And all night long we have not stirred,/ And yet God has not said a word!" We can see from these quotes that Porphyria, now completely belongs to the Lover. Finally, the language used here can help us establish something about the metal state of the lover. We can see that, unlike the Duke, he has psychiatric problems. His looking up to God could suggest he was trying to justify his actions by gaining God's support or he felt no guilt over what he had done. In conclusion, both characters in the poem have similar elements about them. They also have their differences. Both poems are dramatic monologues. This is when one speaker relates the entire poem as if it was another speaker presenting the speaker. They both carry a question of ambiguity. For example we are not certain whether the Duchess was flirtatious or whether Porphyria was proud. We are not told what exactly happens in both poems. Therefore, it is up to us to interpret what is happening in the two poems. Finally, any information, which we are given, comes from the narrator and this may not reliable. Rahul Bose ...read more.