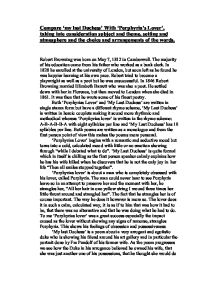 Compare 'my last Duchess' With 'Porphyria's Lover', taking into consideration subject and theme, setting and atmosphere and the choice and arrangements of the words.

Compare 'my last Duchess' With 'Porphyria's Lover', taking into consideration subject and theme, setting and atmosphere and the choice and arrangements of the words. Robert Browning was born on May 7, 1812 in Camberwell. The majority of his education came from his father who worked as a bank clerk. In 1828 he enrolled at the university of London, but soon left as he found he was happier learning at his own pace. Robert tried to become a playwright as well as a poet but he was unsuccessful. In 1846 Robert Browning married Elizabeth Barrett who was also a poet. He settled down with her in Florence, but then moved to London when she died in 1861. ...read more.

'Porphyrias lover' is about a man who is completely obsessed with his lover, called Porphyria. The man could never bear to see Porphyria leave so in an attempt to preserve her and the moment with her, he strangles her, "All her hair in one yellow string I wound three times her little throat around and strangled her". The fact that he strangles her is of course important. The way he does it however is more so. The lover does it in such a calm, calculated way, it is as if to him that was how it had to be, that there was no alternative and that he was doing what he had to do. ...read more.

She was apparently 'too soon made glad' this means she was very easily pleased. It was because of these reasons he had the Duchess killed, yet his arrogance continues as he explains to his friend how his next wife has been treated no differently and is apparently once again, just another object in his collection. To me both of these poems had an impact; with 'Porphyrias Lover' it was how unexpected and yet so calculated the lover murdered Porphyria. 'With My Last Duchess' the impact came from the arrogance of the Duke, also the way he coolly explains how he has his wife killed because she displeases him. These two poems are truly some of the best work written by Robert Browning it may be that his wife's death influenced him to write such powerful poetry. ...read more.