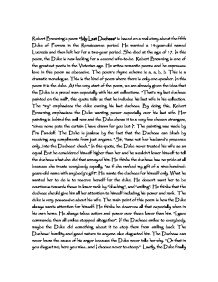 Compare 'My last Dutchess', 'Porphyria's Lover', 'How do i love thee', 'La Belle Dame sans Merci', and 'The begger woman'.

Robert Browning's poem "My Last Duchess" is based on a real story about the fifth Duke of Ferrera in the Renaissance period. He married a 14-year-old named Lucrezia and then left her for a two-year period. She died at the age of 17. In this poem, the Duke is now looking for a second wife-to-be. Robert Browning is one of the greatest poets in the Victorian age. He writes romantic poems and he expresses love in this poem as obsessive. The poem's rhyme scheme is a, a, b, b. This is a dramatic monologue. This is the kind of poem where there is only one speaker. In this poem it is the duke. At the very start of the poem, we are already given the idea that the Duke is a proud man especially with his art collections. "That's my last duchess painted on the wall", this quote tells us that he includes his last wife in his collection. The "my" emphasizes the duke owning his last duchess. By doing this, Robert Browning emphasizes the Duke wanting power especially over his last wife. Her painting is behind the wall now and the Duke shows it to a very few chosen strangers, "since none puts the curtain I have drawn for you but I". The painting was made by Fra Pandolf. The Duke is jealous by the fact that the Duchess can blush by receiving any compliments from just anyone. "Sir, 'twas not her husband's presence only...into the Duchess' cheek." In this quote, the Duke never treated his wife as an equal. ...read more.

The repetition of "I love thee" is by a woman asking assurance if the man feels the same for her. These lines also stress her love for Robert. She believes that true love has no restraints and no boundaries, "I shall but love thee better after death". Through this poem, Elizabeth tells the readers of her love for Robert. She uses imagery to express the vastness or enormity of her love, life and death, sun and candlelight which may mean day and night. The style on which she wrote this poem is different form the way other poets wrote about it. This is the only poem based on romantic love unlike the rest. Among the other poems, this one gives us an idea of how women in Pre-19th century felt about the man they loved. The next poem is "La Belle Dame sans Merci". John Keats wrote this poem and the title means "The Beautiful Lady without Pity" which is translated from Latin. It is a narrative ballad. Other ballads usually talk about the same topics telling the story of a doomed love affair between a mortal and an immortal. These ballads usually refer to mermaids. It was believed that these mermaids lure sailors by singing beautiful songs. If the sailor has fallen in love with the mermaids, they would leave them and so the men would experience unfulfilled love. This poem is about the power of women over great men. It talks about unrequited love. Stanzas 1-3 show that an unknown passenger is talking to a "wretched knight". ...read more.

This is a Latin phrase meaning "seize the day" or "enjoy the moment". From the very first line, Andrew Marvell already stresses the man's objective towards the coy mistress. "Had we but world enough, and time...were no crime", is made by the man to woo the lady. Even though he uses gentle words, the reader gets the idea of what he wants. He wants to have sex with the woman but she is too "coy" or unwilling to do so. He continues on talking about how time quickly flows by comparing it to "Indian Ganges' side". He also uses this as a geographical metaphor including "Humber". Line eight states, "Love you ten years before the flood"; this is a reference from the Bible about Noah's ark. "Till the conversion of the Jews", refers to the religious ways of the Jews. These lines tell the mistress that the man loved her for as long as that and adds to the charm to persuade the mistress to have sex with him. "My vegetable love should grow" and "vaster than empires" are examples of personification. Andrew Marvell makes the readers know that the man's love for the woman is growing like a vegetable. Although it may be slow, it is deep, complex and vast. He also makes the mistress know that he is endlessly fascinated by her. He uses a lot of hyperboles and still goes on praising every part of her body. "A hundred years should go to praise...but thirty thousand to the rest." This is the first part of the poem. The lines are completely dedicated to flutter her and a lot of hyperboles were used to stress the point. The second part however is much harsher than the first part. ...read more.