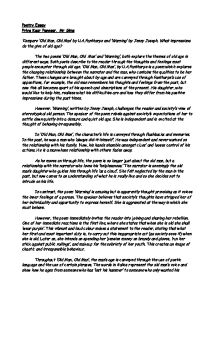 'Compare 'Old Man, Old Man' by U.A. Fanthorpe and 'Warning' by Jenny Joseph. What impressions do the give of old age?

Poetry Essay Priya Kaur Panesar, Mr Sims 'Compare 'Old Man, Old Man' by U.A.Fanthorpe and 'Warning' by Jenny Joseph. What impressions do the give of old age? The two poems 'Old Man, Old Man' and 'Warning', both explore the themes of old age in different ways. Both poets describe to the reader through the thoughts and feelings most people encounter through old age. 'Old Man, Old Man', by U.A.Fanthorpe is a poem which explores the changing relationship between the narrator and the man, who contains the qualities to be her father. These changes are brought about by age and are conveyed through Fanthorpe's use of oppositions, for example, the old man remembers his thoughts and feelings from the past, but now this all becomes apart of his speech and descriptions of the present. His daughter, who would like to help him, realises what his difficulties are and how they differ from his positive impressions during the past times. However. 'Warning', written by Jenny Joseph, challenges the reader and society's view of stereotypical old person. The speaker of the poem rebels against society's expectations of her to settle down quietly into a demure and quiet old age. She is independent and is excited at the thought of behaving irresponsibly. In 'Old Man, Old Man', the character's life is conveyed through flashbacks and memories. ...read more.

This shows the reader that old age can be a life of sorrow, like 'Old Man, Old Man' or frivolities, similar to the tone and descriptions in the poem 'Warning'. As we progress from stanza two through to three and four, the reader approaches a more praising tone, which shows the old man's progressed positive achievements in coping with life-'connoisseur of nuts' and 'world authority on 12 different sorts of glue!' This gives the impression that old age has changed people as they grow up. They are people of confidence and organisation but then their life is pre-adjusted and they become pitiful and miserable, regretting all the things they didn't do in their youth. The tone seemingly appears to move towards being light-hearted; in contrast the reader approaches a more dissatisfied and moving tone in stanzas 5,6,7 and8. The old man re-iterates his 'lifelong' age where he expresses his feelings and emotions, as he gets older and older - 'has no power to arouse!' and 'ramble in your talk around London districts, fretting.' This gives the impression that old age can sometimes be emotionally haunting or like the man in the poem, can imply that you are a demonstrate and anxious figure, 'your surliness; your wife could replace on the walls. Old age can also become a distraction from your children and as stated in the poem 'And you wouldn't really know,' as you become unaware of things around you. ...read more.

On the other hand, 'Warning' gives the impression that old age is not a time of great wisdom and knowledge, but a time of joy and happiness, where you can live life like you have never lived it before. The mood of the poem helps to reiterate the tone of exultance and acting cunningly. The purpose of 'Warning' is to let society come to an understanding that old age is not something to be feared about, but something to look forward to; childhood, adulthood and old age are all apart of one subject. They link into each other and are apart of one. The restrictions that the voice rebels against are sometimes reasonable. When you are old, you can become surprisingly different and 'wear a red hat that doesn't match,' but 'learning to spit' is a little extreme. The voice shocks the reader into thinking that old age is a time of sensation, but the thought of acting irresponsibly stimulates aswell as aggravates some people. In comparison, 'Old Man, Old Man' causes the reader to think differently about old age. It is really a time to settle down and 'not swear'. The narrator sees the old man as a man whose 'hands shamble amongst clues' and lives in 'almost darkness' Both of these poems describe old age in various ways. Old age can either be a time of monotonous activities or a time where people can be young again and live through their sobriety of their youth. ...read more.