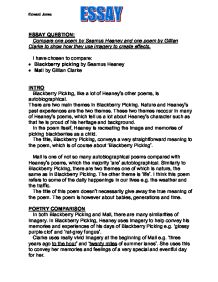 Compare one poem by Seamus Heaney and one poem by Gillian Clarke to show how they use imagery to create effects.

This creates very good imagery and helps to convey the importance of the memories of Blackberry Picking for Seamus. He uses negative imagery, for example when he says 'a rat-grey fungus' to describe the discolouration and rotted-ness of the blackberries. This creates especially good imagery to help put across the disgust-ness of the rotten blackberries. Both poems are at least some way related to nature. We can see this from the way they use imagery to help describe how the poem is linked to nature. They do this to help create a better effect for the reader and also to try and convey the importance of the experience to both the reader and the two poets. In Blackberry picking, Seamus uses imagery to describe the blackberries themselves and also the field he was in. He says the blackberries were 'a glossy purple clot' and 'as hard as a knot'. These both create a very good image of how the blackberries looked and felt. ...read more.

This negative imagery has a particular effect on the reader by again helping to convey his attitude towards the now-rotten blackberries. CONCLUSION Both the poems, Mali and Blackberry Picking convey a strong message and meaning to the poem. The poem Mali is about a child's 3rd birthday, so naturally it is going to be a special occasion for her. I think Mali was written because it was such a special day for Gillian and it meant so much to her. In my opinion, I think Mali is a very effective poem. The many feelings and emotions conveyed in the poem, along with the poetic devices, especially imagery, make it a very interesting poem to read. The poem Blackberry Picking is about a past experience that Seamus had of blackberry picking. I think he wrote this because he feels that the memories of blackberry picking were very special to him and he wants to remember them. I think blackberry picking is also a very effective poem. The details of the blackberry picking are very well explained by his especially good use of vivid imagery and the other poetic devices in the poem. Edward Jones ...read more.