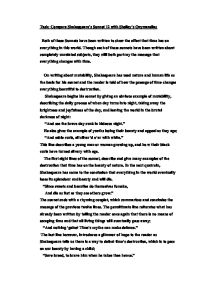 Task: Compare Shakespeare's Sonnet 12 with Shelley's Ozymandias Both of these Sonnets have been written to show the effect that time has on everything in this world. Though each of these sonnets have been written about completely unrelated subjects, they still both portray the message that everything changes with time. On writing about mutability, Shakespeare has used nature and human life as the basis for his sonnet and the reader is told of how the passage of time changes everything beautiful to destruction. Shakespeare begins his sonnet by giving an obvious example of mutability, describing the daily process of when day turns into night, taking away the brightness and joyfulness of the day, and leaving the world in the brutal darkness of night: "And see the brave day sunk in hideous night." He also gives the example of youths losing their beauty and appeal as they age; "And sable curls, all silver'd o'er with white." This line describes a young man or woman growing up, and how their black curls have turned silvery with age. ...read more.

The king believed that the statue would stand forever in his place when he died, looking over his kingdom forever. 'And on the pedestal of the statue, there are these words, "My name is Ozymandias, king of kings: Look on my works, ye Mighty, and despair!'" However, all that surrounds the broken statue is a desert. The sonnet is written to express to the reader that possessions don't mean immortality. This irony is shown in the sonnet because the king believed that his kingdom would remain under his statue's immortal eye, and the statue in fact is destroyed and so is his kingdom, so the statue is merely gazing over lifeless desert. When Shakespeare wrote Sonnet 12, I think that it was named Sonnet twelve to emphasise the poem's message of time. With there being twelve numbers on a clock face and twelve hours of daylight, I don't think that the name of the sonnet was merely a coincidence. The sonnet is written as one sentence and is well structured. The first eight lines describe the effects time has on nature and after the octave, the volta comes. ...read more.

When Shelley wrote Ozymandias, he wrote the first eight lines as a story and the last six lines as a moral to the story. He deliberately used many caesuras and end stopped lines to give the reader a clear image of the statue and the surroundings that the sonnet is based upon; " Half sunk, a shattered visage lies, whose frown, And wrinkled lip, and sneer of cold command." The sonnet is written so that the reader can easily picture the image of the statue in the empty desert, and can see the irony of the inscription. Shelley uses this irony when he describes the destroyed remains of the statue as being "colossal". Both of these sonnets are written about how everything changes with time, but have been written to give the reader two very different messages. Shakespeare is telling the reader that the beauty we see around us will not last, and that as every second pasts beauty is being lost and eventually the beauty will be gone completely. Shelley is telling the reader that it is not possible to try and defeat time, even with non-living possessions. Though the poems are written with very similar moralities behind them, they are written in completely different styles. ...read more.

There are some apt points made in this essay and some aspects of language, structure and form are considered. There are some comparisons made between the two texts but there should be more links made through the exploration of similarities and differences in the texts.