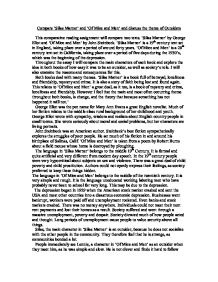 Compare 'Silas Marner' and 'Of Mice and Men' and discuss the theme of Outsiders This comparative reading assignment will compare two texts. 'Silas Marner' by George Eliot and 'Of Mice and Men' by John Steinbeck. 'Silas Marner' is a 19th century text set in England, taking place over a period of around forty years. 'Of Mice and Men' is a 20th century text set in California, taking place over a period of five days during the 1930's, which was the beginning of the depression. Throughout the essay I will compare the main characters of each book and explore the idea in both books of how easy it was to be an outsider, as well as society's role. I will also examine the reasons and consequences for this. Both books deal with many themes. 'Silas Marner' is a book full of betrayal, loneliness and friendship, mystery and crime. It is also a story of faith being lost and found again. This relates to 'Of Mice and Men' a great deal, as it too, is a book of mystery and crime, loneliness and friendship. However I feel that the main and most often occurring theme throughout both books, is change, and the theory that because something has not happened it will not.' George Eliot was the pen name for Mary Ann Evans a great English novelist. Much of her fiction relates to the middle class rural background of her childhood and youth. George Eliot wrote with sympathy, wisdom and realism about English country people in small towns. ...read more.

He didn't spend enough time with her, and decided to live well apart from her. It was possibly because Godfrey pushed her away from him, and made her life feel separate from his, that she turned to using drugs. We learn that it is not easy for Godfrey to leave Molly, regardless of how little love he had for her because they have a child and Molly is its mother. Curly, the son of the boss of the Ranch is extremely pugnacious. He is quite handy on the Ranch as he was a professional boxer. He therefore has the strength and ability to perform the tasks and work well. However, he diverts his strength to anger. He is constantly bullying the workmen. Curly feels left out because of the expectations he feels he must live up to, because he is the boss's son. He does not turn to anyone for help and support, and so does not have a friend and relies on himself. As he is "on his own on the Ranch" because his wife, 'the girl' (a female = inferior) is not his equal, he is an outsider in his own right. Even his father despises him because he is so cruel. The fact that Godfrey in a way disowns Molly causes Molly to be an outsider also. Her husband is very cruel to her, for not accepting her and excluding her from his life. The girl on the ranch throughout the whole book is never given a name and is addressed by everyone, as 'the girl.' ...read more.

Slim is an outsider as he is unique in the sense that, everyone respects him. During the time of the depression everyone was out for themselves and this often led to people being unkind to others. Slim does not show anger; however, if the inward anger he may possess comes out, it will be more deadly and disastrous than anyone could imagine, as it is the most vicious. Silas finds true happiness in Eppie at the time his money is stolen from him. He believes the child is sent to him by God, and that it is his duty to take care of the child, so he continues to bring her up as his own. His life changes for the better. He gradually becomes happier and restores his faith in the church once again. His most trusted friend George kills Lennie. George feels it is best for the both of them, as Lennie only causes trouble. Without George, Lennie is bound to get into serious trouble, and this could easily lead to him being murdered by someone else. George will now continue to live life on the Ranch as a Rancher. The fact that each outsider does not communicate with someone they trust, leads their life on the wrong path and disrupts their way of life. Each outsider is miserable, or doing not as well as he or she could because they do not have support from a friend or society to feel wanted and/or accepted. The concept that Silas found happiness in a child, and Lennie in George reveals that people are more happy when they have someone they feel close to, who they love and trust and vice versa. ...read more.